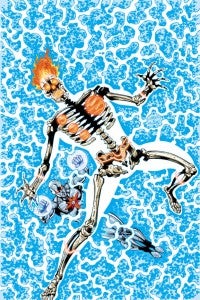 #15, just out on a number of digital platforms and in stores in the next eight hours or so, features an issue-long battle between Firestorm, possessed by the mind of Captain Atom villain Dr. Megala, and Captain Atom, returned from his self-imposed exile at the end of his recently-cancelled series.

Now, it's rare that when a major character like Captain Atom loses his monthly he gets to go out on his own terms and simply stop appearing in the universe. More often than not, publishers tend to inject such higher-value properties as his into a team book, or at least make them supporting characters in the series of a character with similar sensibilities. With members of Captain Atom's supporting cast (and of course his villains) showing up regularly so far in Dan Jurgens's reinvented take on Firestorm, it seemed as though the stage was being set to incorporate Atom into this series--but that's not the case. 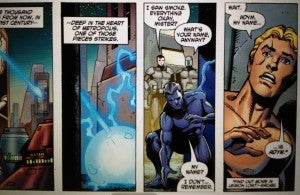 It was surprising to see, a few months ago, that "Nathaniel Adym" started showing up in Legion Lost with the zero issue in September. A 31st Century police captain, his connection to Captain Nathaniel Adam was not clear...but now it is.

Following the events of The Fury of Firestorm the Nuclear Man #15, Captain Atom's body is damaged and he's going critical; shards of his energy-based form are hurled through the timestream and, lo and behold, one of them ends up in the 31st Century, where he's found and identifies himself as "Adym." His physical appearance, including a scar on his face, jives with the Adym who's appeared in the last few issues of Legion Lost.

A caption box tells readers to find out more in Legion Lost, a title that will end next month. What role does he play in that title's finale? We'll see January 16.