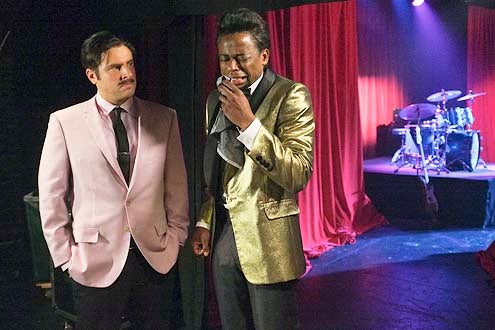 When Psych traveled back in time to 1967 on Wednesday, series star James Roday was ahead of his time -- wearing a suit more recognizable as Fredo Corleone's from the 1972 film The Godfather.

You can see Roday in the suit above, and John Cazale's Fredo in the tweet embedded below from Psych creator Steve Franks.

This is, of course, not the first time the series has done something like this; nearly the entire cast wore period-appropriate, Hitchcock-themed costumes in "Mr. Yin Presents...," an Alfred Hitchcock-themed episode from the show's fourth season.

“@JamesRoday: Thank you, Fredo Corleone. pic.twitter.com/RrKIcfy2dn” Roday fought all the powers that be for that suit. A hard-won victory.

Well, after all that we hope he got to keep it when production wrapped.

Psych is back on Wednesday with the first of its final four episodes.