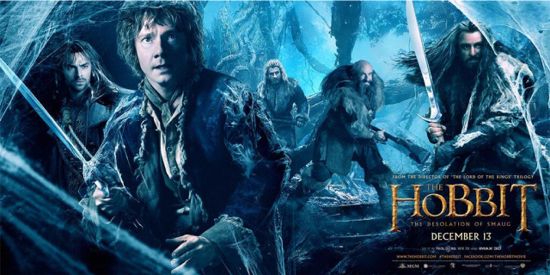 If you were one of the fans tuned into The Hobbit Fan Event on YouTube earlier today, not only did you get to watch the Q&A with cast and crew, but you also got to be the first to see the footage below, which has now been officially released through the movie's YouTube channel.

What follows is a three-minute preview of The Hobbit: The Desolation of Smaug, the second film in the three-movie adaptation of J.R.R. Tolkien's The Hobbit by Academy Award-winning Lord of the Rings director Peter Jackson.

It's been a banner week for the franchise; with about a month left before the release of the second installment, the film got an homage in the form of a Simpsons couch gag this week as well as the release of an Extended edition on Blu-ray and digital download, due out tomorrow but already available via iTunes. With extras which, as consumers of digital-download movies know, is a rarity.

The Hobbit: An Unexpected Journey Extended Edition will be available as a 5-disc Blu-ray 3D set ($54.98 SRP) that features the Blu-ray 3D and Blu-ray versions of the Extended Edition; a 3-disc Blu-ray ($35.99) and a 5-disc DVD ($34.99) The Blu-ray 3D, Blu-ray and DVD all include UltraViolet which allows consumers to download and instantly stream the Extended Edition in high definition to a wide range of devices including computers and compatible tablets, smartphones, game consoles, Internet-connected TVs and Blu-ray players.

So check out this preview below and keep your eyes peeled for a good price on the Extended Edition, due out in a couple of hours if you want to head to a 24-hour store and be the first to snag it at midnight.

The Hobbit: The Desolation of Smaug Three-Minute Preview Released