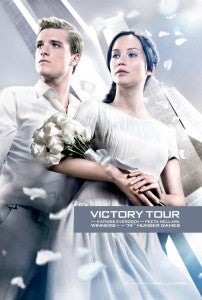 Tickets will be sold through Fandango, MovieTickets.com and individual theaters' and exhibitors' websites and ticket kiosks.

The film, the second in a series of four based on a trilogy of novels by Suzanne Collins, is due in theaters on November 22. Last year's first installment in the series grossed $408 million domestically. If Catching Fire matches that number, it will be the second-highest-grossing film so far in 2013.