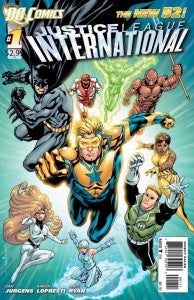 I tried to keep it pretty restricted to the issue in question, not asking too many questions about how continuity does or does not fit, or what characters did what together when in the past, except for in very general terms. This column isn't The Gold Exchange II. It's a fresh start for a new series, and I want to treat this comic with the same respect I gave Shinku or Rachel Rising.

Sadly, this month's interview ran a little late as a result of the flooding in the Northeastern United States, which caused my neighborhood to be evacuated and somewhat spoiled my weekend, but I'm back in the saddle (if not my home) now and Dan's answers are below.

The International Exchange: So this first sequence explains the teaser images that people went nuts over with Plastic Man and The Creeper and B'Wana Beast last week – given context, though, that's not just a "who's in, who's out" thing; it also serves to show readers that some of these characters still EXIST in the new DC Universe. Was that intentional?

Dan Jurgens: Yeah. I think, when dealing with the notion of a new universe of sorts, that it's important to provide some sense of context of the past. You don't need to go as far as blatant, slap 'em in the face with it statements-- you just drop some visuals and hints and let it go at that.

IX: The various UN representatives and national leaders who appear in the first scene: Are they being set up as supporting players in the series or is this a one-off, "putting the band together" kind of appearance?

DJ: Andre Briggs and Emerson Esposito will have an ongoing presence in the book.

IX: Certainly it seems like having Briggs answering to someone above himself is a good thing. It theoretically prevents someone manipulating the League for his own personal ends. Not that anything like that has ever happened before.

DJ: Exactly right. Let's be honest-- in a large bureaucracy like the UN would have, everyone answers to someone.

IX: Is there a history to the Hall of Justice that makes it a logical choice for the new League?

DJ: We can assume the Hall of Justice existed and was used. We destroyed it as a conscious reminder, wanting to show that those days are over. A new facility will be necessary.

IX: When a fan says "Is that Green Lantern?" is that a subtle callback to the popular Justice League Unlimited episode that featured Booster?

DJ: Ha! Of course! While at the same time signaling that these characters are perceived somewhat differently than they were previously.

IX: The comment about the basement-dwellers is kind of begging for a response, isn't it? I know some people on the Internet seem to have gotten their nose bent out of shape over the comment, but I read it as Briggs being the devil's advocate and Booster speaking your position for you. Did I misunderstand?

DJ: You didn't misunderstand at all. I wrote that line right around the time that DC's plans had become public. I'm always fascinated by a response from people who claim to despise product before they've seen it or really know anything about it.

Do I understand fans having a tremendous allegiance to a previous universe and timeline? Of course. Hell, I wrote a lot of that so I have a fondness for it as well.

However, I think it's still fair to ask them to be a bit openminded and receptive about what we're trying to do.

So Briggs' comment address a very, very small group that reacted in that way. Frankly, it's good to have a sense of humor about some of this and read it with that in mind.

IX: Did you have any worries about the "Starve the UN" sign? When Marvel had something similar in Captain America, with protestors who later turned out to really be villains, they altered the lettering for trade after finding out that some of the signs were something an actual protestor from an actual group might carry. Certainly it seems like the kind of thing some conservative groups might have.

DJ: Can't say I'm concerned. The sign expresses the opinion of one particular individual in the crowd. It's not my opinion or anyone else's.

Look, we live in a world of polarized opinions. That's part of the backdrop of JLI-- some people will like the idea of the UN sponsoring a team, others won't.

As fractured as we are, it's appropriate, I think, to reflect that in the book.

IX: Guy's over-the-top reaction to Booster as the leader, coupled with Batman's confidence in everyone's favorite super-spokesman, seems to suggest that Batmanknows something about Booster Gold that the rest of the world doesn't. Is it possible that's the case?

DJ: That is 100% the case. I think I made it clear that some of these characters have met before and share something of a past.

IX: Ice certainly seems to know what makes Guy tick. Given that she was dating him like a year ago in Green Lantern Corps (that book still counts, right?), is it safe to say that relationship is a part of their shared backstory?

DJ: Not quite to the extent you might think. They've had a few dates. Not a deep, long term relationship.

IX: That said, Godiva certainly seems...interested...in Booster. You know, he should get on that. Biological-clockwise, isn't it time he should have a kid?

IX: Even in spite of his attitude toward the August General in Iron, I can't help liking Gavril a bit here. Taking Booster aside to discuss his concern is a classy move that shows the kind of savvy someone like Guy is sorely lacking in the issue. Is it safe to say that some Leaguers will be able to play the game better than others?

DJ: Absolutely. It's a mix of people. Put eight people in a room and they're bound to react differently to ideas and thoughts that might come up.

IX: The knowledge that Booster is from the future is common, then? In the past it's been intermittent the extent to which it was widely known.

DJ: Yes, it's widely known. The question, though, is how many people really believe him when he says it?

IX: I can't tell a lie—when the pilot of the plane was obscured and you had to turn a page to see it, my heart jumped into my throat a little. Bruce was actually a little bit of a disappointment compared to who I thought for a second we might see—how important was that reveal, in terms of establishing Bruce's relationship to the rest of the team even though he was "rejected" by the UN?

DJ: Well, Batman was on the cover. Every reader generally knew he was part of the group, right? But I think the way you bring characters "on stage" and introduce them to the mix is very important. It carries an impact beyond the appearance itself.

Given who Batman is and the UN's desire for accessible heroes, there's no way they'd approve him so he'd have to join the team in a very "Batmanish" sort of way.

IX: Between the banter he had with his assistant and the conflict with Booster, it seems evident that Briggs may have an agenda of his own. Is it the kind of thing that's likely to bring him into conflict with his own team, or just his superiors?

IX: Will these terrorists who attacked the Hall of Justice recur, or is this just a way to throw a monkeywrench into the League's plans?

DJ: There is more of a story to be told there.

IX: Who redesigned Fire's costume? Was that Aaron or was it part of the larger DC initiative by Lee and Hamner?

DJ: That was Aaron. He did Rocket Red as well.