Yes, folks--just like the clean-cut Dobie Gillis, Superman has had his share of girlfriends over the years.

And as he enters a new relationship with Diana, Princess of the Amazons (better known to most as Wonder Woman), it seemed as good a time as any to look back at those who have come and gone from his life and the impact (or lack thereof) they've had on his stories.

Oh, and obviously we're leaving off Lois Lane. Everyone knows about her and she even had a long-running comic book titled "Superman's Girl Friend, Lois Lane," so it's probably safe to assume there's no need to recap their life together here. I'm sure I'll miss some others, so feel free to chime in and remind me in the comments. 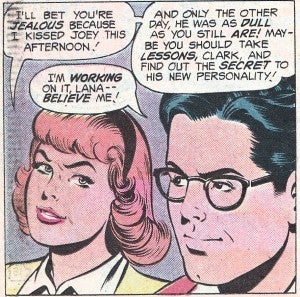 Created in 1950 and still appearing (intermittently) all the way up until Flashpoint reset the DC Universe, Lana is without question the most significant of Superman's non-Lois Lane love interests. His high school sweetheart, Lana has been one of the only characters to whom Clark has gone back over and over, alternately being with her, desiring her or treating her as his closest friend and confidant.

During the post-Crisis on Infinite Earths stories, Lana was part of the rise of Smallville's importance, and along with Jonathan Kent was key to helping an older, more emotionally-developed Clark deal with the onset of his powers. With the Kents still alive and Superman visiting semi-regularly, Lana and Pete Ross became an essential part of Clark's supporting cast, and their marriage--and the subsequent chemistry change among their group that it created--gave writers a lot to work with.

She was also willing to do something that Lois rarely would during the '90s--ask Superman for help. Since she was the first person outside of his immediate family with whom Clark shared his secret, Lana could call on Superman when she needed help--and occasionally did. Notably, her relationship with Superman resulted in her newborn baby being placed in harm's way when Brainiac needed a new body to inhabit! 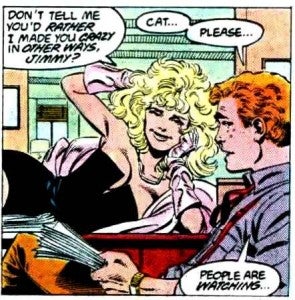 A short relationship with a long flirtation attached, Cat Grant was brought into the comics by Marv Wolfman and Jerry Ordway as a potential love interest for Clark...but the relationship fizzled pretty early on and Cat was left pining away for the hunky Kansas farmboy in the newsroom.

She's another character who's been involved in almost every iteration of the franchise on film, but in the case of Grant, she doesn't get nearly the endearing depiction that Lana does (although your mileage may vary on how lovable Kreuk's version of Lana was, that's a whole other thing). In Lois & Clark, she was depicted as a hyper-sexualized bimbo and in Smallville, Cat came in late and literally, physically replaced Lois in the room for a while when the latter was away.

Her interest in Clark was small, and she was used mostly as a pretty face to keep male viewers content while Erica Durance was gone and as a kind of Fox News zombie for the Glorious Godfrey set during the final season's Darkseid storyline. Arguably her most memorable episode revolved around the way she rejected Superman and embraced Booster Gold. How she'll fare during her stint as a tabloid reporter in Arrow is anybody's guess. 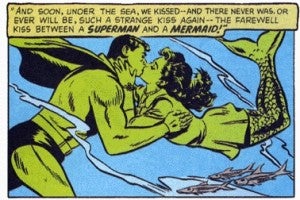 She was a mermaid, and the relationship wasn't a one-off. Just...let that sink in for a minute.

Like in the movie Splash or The Little Mermaid, she grew legs for a while and attended college with Clark. And, also like Splash, she decided she had to return home, so she rebuffed his proposal of marriage.

Yeah, Superman proposed to a mermaid. It was the Silver Age.

Anyhow, he later revealed his identity to her, which she knew all along since she was a telepath. And after dying in the Crisis, this character was actually, shockingly, brought back during the Roger Stern/Dan Jurgens/Louise Simonson run on the Superman titles. During that time, she was enchanted to be a mermaid when wet and a human when dry, which had to, had to, had to be a reference to Splash.

Lori hasn't made an appearance in the New 52 yet, but don't count her out; after dying in Crisis on Infinite Earths, she came back and after apparently dying in Infinite Crisis, she returned yet again. There's really no good reason to think a little thing like Flashpoint could keep her down. 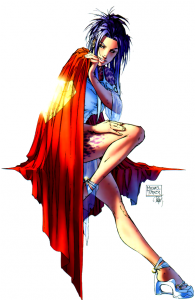 Frankly, not much of anything that ever went on with this character made a whole lot of sense, but I'll try and see what I can do to explain it to the best of my ability here.

She came from an alternate reality, in which she was a powerful character who hated Kandor. At some point she started dreaming of Superman, somehow summoning him to her side. He appeared injured and disoriented, so she of course used that to brainwash him into believing that the two were lovers, nursing him back to help and eventually stealing and using his powers to return to "our" reality.

She sacrificed herself to protect Superman, ultimately, but he never believed she was actually dead. Of course, now none of that ever happened so it's largely academic.

Fun fact: Her powers include telepathy which, along with her name, make it extremely difficult to differentiate her from the DC character Harbinger.

This one's got to be the name that's seeing the biggest spike in search traffic today. A one-off character, Sally was the daughter of a billionaire who briefly had a relationship with Clark/Superman while he was under the influence of red Kryptonite and had amnesia.

No trickery, no lies, no powers, work conflicts or crippling emotional baggage--just a gal who genuinely enjoyed his company. Of course, that means she was never seen or heard from again.

There are plenty of people who have WANTED Superman over the years, and some who tried to take him by force. A couple of the notable ones?

Maxima - An alien empress, villain and eventually Justice League member, she was essentially the Talia al Ghul of the Superman mythology. There was even a small contingent of fans who shipped for this couple, so who knows what might have happened had he not been engaged to Lois for essentially the character's entire life on the page?

Mrs. Superman - Totally a one-off thing, but after Superman's death, there were a number of people who claimed to know him in order to attempt to cash in on the media circus surrounding his fight with Doomsday. One, claiming to be his wife, held a press conference in Metroplis--where Lois, grieving the loss of both Superman AND her fiance, had to control her anger.

The Justice League - You know the phrase "married to the job"? That was one of the first things Jeph Loeb and company did when they took over Superman in 2000 or so; apparently Clark forgot to take off his wedding ring before changing into the costume, and was therefore photographed wearing it by the newspaper. The ensuing media firestorm ("Holy crap--Superman is married?!") resulted in the Justice League all donning fake wedding rings for a press conference that seemed eerily and bizarrely Silver-Agey in nature, where they pretended like that's the homing and communication device they all used.

"Yes, we ALL use it. You've just never seen it before. Shut up."

The Many Loves of Superman