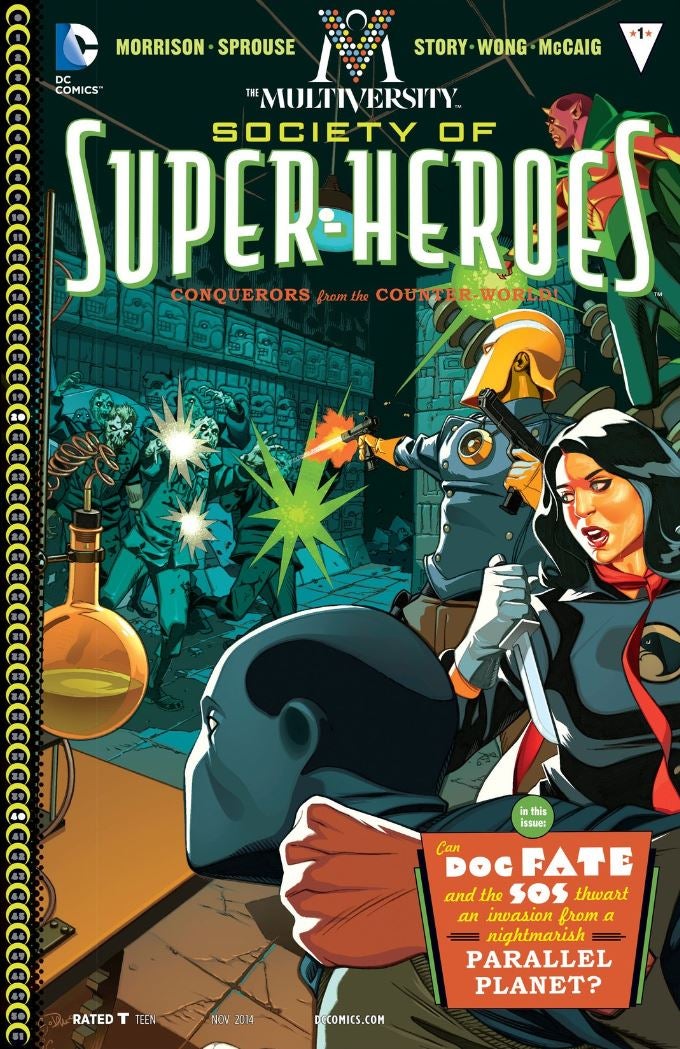 With the second issue of Grant Morrison's The Multiversity, he tackled the tropes of the pulp adventure fiction that gave birth to much of comics, bringing in mystical elements, war, and other things that would feel at home in the pages of dimestore paperbacks as much as, or more than, in superhero comics.

And yet he still found plenty of time to drop in Easter eggs and references galore. We won't bother to just list off every character who appears in the issue; assume that we know that, yes, that's Abin Sur or Lady Shiva or whomever. But here are the things that stuck out to us as particularly interesting or notable.

You can read our review of the issue here.

Update: Regular reader and commenter Michael Sacal noted on Facebook two minor omissions below: Immortal Man was mentioned several times (though never seen) in Resurrection Man in the '90s -- and Fate's cube, which we joked could be a wink and a nod to Marvel's cosmic cube, was likely modeled after the one from the first arc of JLA: Classified, not Marvel's.

The Tower of Fate

Our reviewer Chase Magnett noted that the Tower of Fate in this issue is actually situated in the same spot as DC's New York offices! This is likely to be the last time those offices, which are being abandoned soon, will make it into the comics.

Many younger comics readers probably haven't had much experience with Immortal Man, who was the opposite number of Vandal Savage, one of DC's favorite villains. The two were engaged in an epic battle for centuries, sometimes with Immortal Man recruiting the aid of the Forgotten Heroes to help him in his attempts to keep the mad barbarian at bay.

Ultimately, Immortal Man died during the Crisis on Infinite Earths and, by both my recollection and the DC Wiki (either could be wrong, but both being wrong in the same way seems less likely) we haven't seen him since.

Merging him with Anthro the Cave-Boy, one of DC's more popular prehistoric characters and one with ties to Final Crisis, is a new choice made here by Morrison; the pair don't have a connection that I can recall other than the fact that both of them were alive at the same time millions of years ago.

[Note: it seems they were both part of the Bear Tribe in Anthro's time, but there's nothing else to indicate they had a relationship. Perhaps this is how Morrison decided that making them the same person could work.] 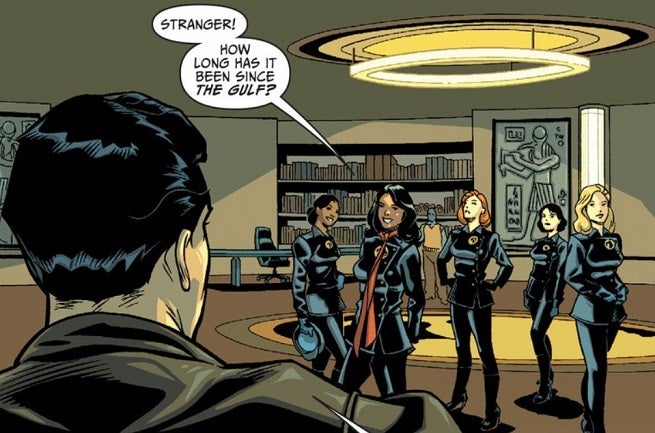 This story is full of the pulp fiction-inspired heroes like the Blackhawks (super-talented and sometimes sexy pilots), married with mystical elements that you might see in pulp fiction like those that inspired Indiana Jones. So, it's probably not much of a surprise we see the image of Ibis early on.

Besides the fact that there is a DC character called Ibis, who wields an Ibistick (seen in the Constantine pilot, btw), this Egyptian god appears behind the group of Blackhawks in the first shot we see of them. That god is the source (or at least a source) of powers for a number of DC heroes and villains.

Note that in this issue, The Atom has the Doctor Manhattan hydrogen atom on his forehead. This was selected in Watchmen for being a meaningful and significant atom to a man of science, rather than just a cool-looking "atom" graphic, as the ones worn by Captain Atom and The Atom often are.

The man who would step in to play the role of the Golden Age Superman in retellings of a number of stories in the post-Crisis era (and grandfather to Manhunter Kate Spencer, too!) was apparently the guy who trained The Atom in this reality. Cool to see people haven't totally forgotten ol' "Arn," who was a great, kind of pulpy alternative to Superman. 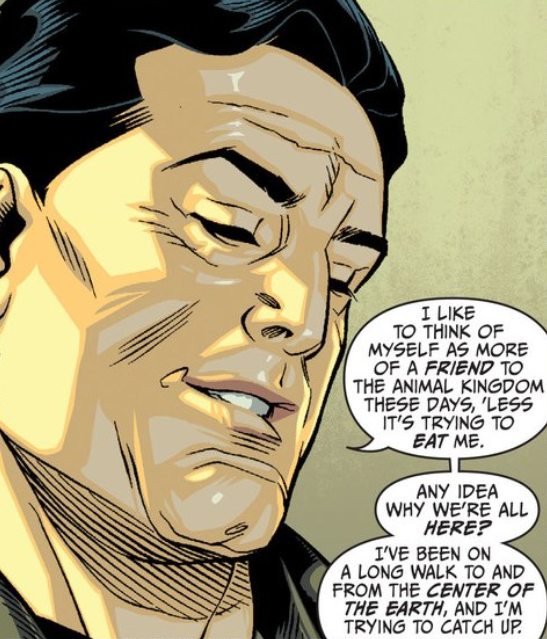 So...where might The Immortal Man have been going in that journey to the center of the earth, eh? Skartaris, home of The Warlord, seems like a good candidate.

Not sure if this was meant to be a reference to Jonah Hex or somebody else, but it certainly seemed worth a note, since it was mentioned only in passing and there was no on-panel character to match up with the name and make sure fans noticed it.

Better known as Ibn al X'uffasch, the child of Batman and Talia in the Kingdom Come reality was apparently kept rather closer to the al Ghul family in this world. 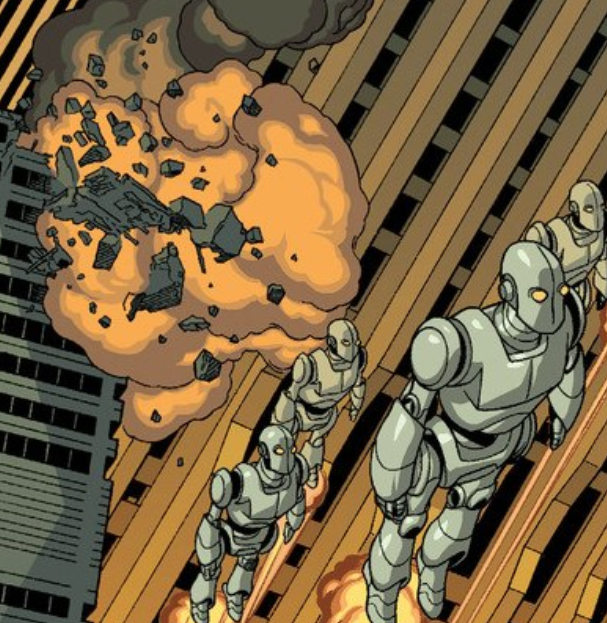 Wait...is that the Iron Giant?!

Maybe it's just me.

The construct that allows them to move between universes is a massively powerful cube. A COSMIC cube, you might even say?

It can't be a coincidence that at the same time DC Comics's entire publishing line, less The Multiversity, jumps Five Years Later, there's all this talk of the Five Year War that Vandal Savage wages on mankind, can it?

Well, that's pretty Kirby-inspired, isn't it? Nix Uotan is the villain to this story, of course, but the version of him that we see on this earth reminds me a lot of the Celestials Kirby created over at Marvel. The massive head combined with the distinctly Kirby-inspired design on the front is pretty telling...!

The Multiversity: Society of Super-Heroes: Conquerors of the Counter-World Easter Eggs

My Hero Academia: Why Star and Stripe Might Lose to Shigaraki