My name's Russ Burlingame. I'm a longtime comics reporter for places like Comic Related, Newsarama and Wizard Magazine, and a recent transplant here to Comicbook.com. I also do an interview podcast over at Comic Related called Panel Discussions, which has been looking pretty exhaustively at DC Comics's New 52 initiative. I decided early on that I would give each of the 52 titles at least a month or two, and that while I did so I would review them all. This is the first week of that process. With a little luck, these reviews will be a bit more timely over the course of the next three weeks; I was evacuated from my home as part of the flooding in the Northeastern US this week and still have not returned. Thank goodness for Comixology, eh? I'll give each issue a star rating, with five stars being the top rating. 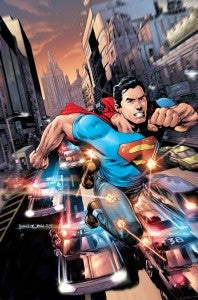 Action Comics #1 - ****1/2 Written by Grant Morrison; art by Rags Morales and Rick Bryant. It's been looked at here already and I agree with much of what has been said, but it's worth noting that I was very excited to see Morrison's take on the Golden Age Superman. As champion of the oppressed and someone willing to speak truth to power, Superman is, here, uniquely suited to have a renewed relevance to today's society. Since Superman's 1938 debut in the first Action Comics #1, we've experienced World War II, Vietnam, Watergate, 9/11 and Enron. We live in a culture where we know "not guilty" doesn't mean "innocent" anymore thanks to O.J. Simpson and Dominique Strauss-Kahn but one, too, where we understand the poor and minorities can be put to death on bogus charges. A superhero who's willing to take the Ken Lays and Strauss-Kahns of the world out a window with him, then, is something I couldn't wait to see. Did it work? I think so. Superman didn't do anything here that would be fundamentally out of synch with his later persona as "the hero all the others look up to." Would an older, wiser Superman look back at this period in his life and maybe think, "Wow, I was a crazy kid!"? Probably, but plenty of people feel that way and it doesn't mean they were wrong, just that they've matured to a point where they're a little more mellow. Beyond the lead-in of Superman taking down a wealthy and powerful businessman, we have another plot that introduces a good candidate to follow the disgraced Mr. Glenmorgan up as "Mister Metropolis": Lex Luthor has been hired by the US government to apprehend Superman, who they perceive as a threat. He does so using technology, resources, an absolute lack of regard for human life and the kind of long-term, Machiavellian plan that confirms he's the Lex we all know and love, even if he's (currently) on the right side of the law. What's also interesting here is Morrison's establishing Clark Kent as a struggling college student, a freelance journalist and somebody with his own supporting cast who aren't necessarily Superman's. That's something Clark has never really had in my lifetime, outside of the small cast of characters in Smallville, who rarely appeared in his month-to-month adventures. I mean, it isn't much—so far just a kindly old landlady and Jimmy Olsen, who now works with Lois but not Clark—but it's a start and it's an interesting choice. 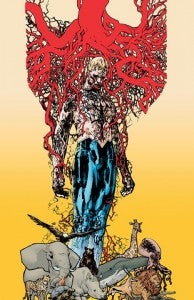 Animal Man #1 - ***** Written by Jeff Lemire; art by Travel Foreman and Dan Green. This one's interesting; not one of DC's top-selling titles, it's become a favorite around the DC offices, according to a recent interview I did with Jeff Lemire for Panel Discussions. Geoff Johns is quoted on Lemire's blog as referring to the title as his new favorite monthly comic book, and it's easy to see why. Buddy Baker is played as middle-aged here, having bounced from career to career in recent years. He's got two kids and a wife who keep him grounded but he also seems to live in a state of arrested development. In spite of having retained most of his previous history as well as his wife and kids (a truly rare blessing in the wake of the relaunch, but imagine the potential for this particular character if he had lost them and later found out about it), he strikes you as someone in his mid-twenties. Like many of us it seems like he's a couple of years out of college and still not quite sure what to do with himself. This makes him remarkably relatable, in exactly the way DC has presumably worried that marriages would prevent. The solicitation has blown the ending a bit, so I won't rehash that here—but it's an interesting one that promises a lot of potential for future storytelling. And it's clear Lemire and Foreman are able to step up to the plate; the kind of visual storytelling on display here is rare and precious in mainstream American comics, and while I'm not crazy about Foreman's actual figurework and detail work, the broad strokes and the boldness more than make up for it. 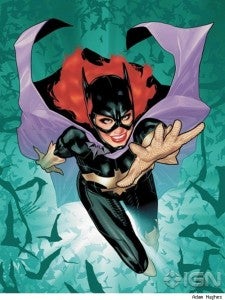 Batgirl #1 - *** Written by Gail Simone; art by Adrian Syaf and Vicente Cifuentes; cover by Adam Hughes. "It's time to stretch my legs, don't you think?" With that shockingly tasteless line, I feel like Gail Simone burned away all the goodwill she has bought herself by so eloquently engaging in a dialogue with advocates for the disabled following the initial announcement that Barbara Gordon's paralysis would be mysteriously cured and that she would once again be Batgirl. The issue opens with an action sequence that's good, solid, and Syaf's art is stunning throughout; but the capable scripting of Simone just isn't enough to sell me on a character I'm not particularly invested in, particularly when you consider what we appear to have given up in exchange. The line referenced above is actually not something you'd find out of the ordinary in Spider-Man these days; the story opens with Barbara back in the home of her father (Commissioner James Gordon) following a miraculous and apparently recent recovery from the back injury that has kept her wheelchair-bound since Alan Moore's classic story The Killing Joke. As a reader, my first instinct was to wonder how far back her clock had been wound that she was still living with her dad, but she almost immediately clarifies that she's lighting back out on her own. The best part of the issue is the new supervillain Simone has introduced; The terrifying opposite side of the Spectre's coin, Mirror is a great premise and one that affects Barbara in both of her identities and has tremendous potential in the DC Universe. 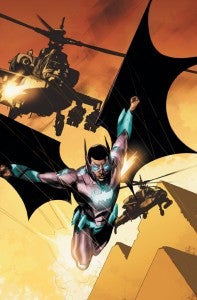 Batwing #1 - *** Written by Judd Winick; art by Ben Oliver and Brian Reber Judd Winick brings some baggage back to the Bat-family as far as I'm concerned; I've never warmed to the return of Jason Todd and as the architect of that story I'm always a little hesitant to see what he has up his sleeve next for Gotham. Of course, this book doesn't take place in Gotham but like many of the smaller titles this month it features a cameo appearance by Batman. Batwing is an interesting book, and a bit of a confusing one as you have to page back through it when you finish to discover that the cliffhanger at the end of the issue actually appears to happen in the past, taking the wind out of its sails a bit. That said, the script is solid and the character is accessible. As a cop, he feels a bit like an African version of Nightwing (during the Chuck Dixon run) and the glimpse you get into the past of the African superhero scene is tantalizing. It'll be interesting to see how fast he chooses to reveal how much information. Oliver's art is technically great, but I'm unimpressed with Brian Reber's colors, which are dark and muddy throughout. I understand the need for Batman books to be "dark" but there are times when it's more important to be sure the visual storytelling isn't impeded than it is to toss a little more ink into the visual. 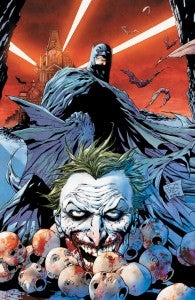 Detective Comics #1 - **** Written by Tony Daniel; art by Tony Daniel and Ryan Winn Let me say up top that, unlike many readers, I've never had any problem with Tony Daniel's Batman. But this book…it just looks great. While the final, bizarre and terrible splash page has been the focus of much of the coverage, it's only a small sliver in a sublimely dark and clever Batman title. Holo-Alfred is an interesting twist and one that I hope we get more of an explanation for in the coming weeks (as Newsarama already discussed, I think this is just a way of modernizing the story and preventing Alfred from having to trek up and down from the cave so often), but that was a minor distraction in an otherwise-great story. Even the excessive use of splash pages or large panels, which seem a big self-serving being scripted by a writer-artist, was acceptable because we got to see Daniel's cool and well-rendered take on Bruce's new wardrobe. All around, one of the better titles this week and certainly the best Bat-book. Green Arrow #1 - ***1/2 Written by J.T. Krul; art by Dan Jurgens and George Perez One of the characters who seems to be most radically altered with the relaunch is Green Arrow, which is funny considering that Krul has been writing the character for a while now, and is one of the only DC writers to stay on the same title pre- and post-relaunch. The 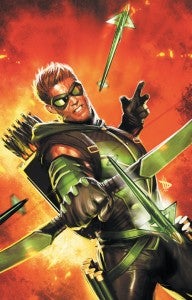 Ollie we know is basically gone, replaced by someone who works for his dad's technology company and seems to be one part James Bond, one part Steve Jobs and of course the obligatory one part Robin Hood. The book looks fantastic, as one would expect with Jurgens and Perez, two of the great talents of the last thirty years of comics, working together to craft the visuals. And both the premise and pacing are really strong on Krul's part. The only real problem, honestly, is the villains. They feel very generic and, while that may dissipate after a final-page reveal, it doesn't do much to help you take Ollie more seriously as a Batman-level weapons master and globetrotting justice-doer. That said, it certainly is a more interesting take than I've seen from the character in years and Krul has done well in making the title a little "younger," eschewing Ollie's old CIA buddy Eddie Fyers (who would have been a natural source for intel) for a couple of twenty-something hackers on the Q-Core payroll. The real question is whether these characters break out on their own rite or stay "young hackers" and devolve into a stereotype. Join me tomorrow for the second chunk of the alphabet, including probably my favorite and least favorite titles of the week!

The New 52 Review Revue: Week One, Part One