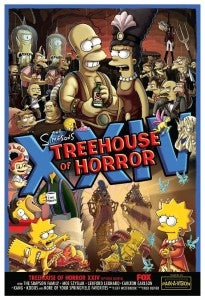 While his latest film Pacific Rim is available on Ultraviolet by Flixster starting this week and will be out on video in two weeks, Guillermo del Toro's next big gig is The Simpsons; the Hellboy and Pan's Labyrinth director contributed to the Treehouse of Horror special that will air on Sunday night. You can check out his opening credits sequence below, which includes references to most of his own films as well as dozens of other science fiction and horror movies stretching back decades--and to The Simpsons's own tendency to have literal torch-wielding villagers turn up more often in Springfield than in most modern American cities. Check out the video embedded below; The Simpsons Treehouse of Horror XXIV will air Sunday at 8 p.m. EST and PST.