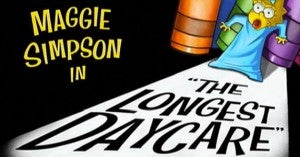 20th Century Fox has released a short (12 seconds) trailer for The Simpsons: The Longest Daycare, their Maggie Simpson-centric short film, to Entertainment Weekly. Dubbed "the shortest trailer of the summer," it teases the four-minute film, which revolves around Maggie's return the Ayn Rand School for Tots and some more of her fan-favorite rivalry with the unibrow-sporting Baby Gerald. The Longest Daycare will be screened ahead of Fox's Ice Age: Continental Drift, which opens next Friday. Check it out--you get to see The Simpsons in 3D!

The below teaser is listed as a new trailer at Bleeding Cool, so I'm adding it to the story...but it seems oddly familiar and may be the original announcement from a month or two ago. Either way, another quick-hit teaser: