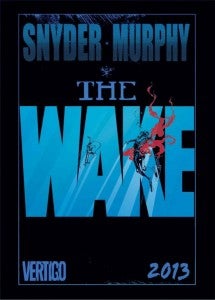 In addition to Trillium, Vertigo also announced another new title today at the New York Comic Con. The Wake will be a new limited series written by Scott Snyder with art by Sean Murphy. The two previously worked together on America Vampire: Survival of the Fittest.

The Wake is scheduled to be released in 2013. The Wake is an underwater sci-fi epic. It is set amidst sweeping oceanscapes and involves a discovery that reveals a secret mythology.

"I couldn't be more excited about The Wake!” said Snyder. “This is a story Sean and I have actually been developing together for more than a year, a big, twisted, sprawling science fiction and horror epic, all of which begins with a single, terrifying discovery at the bottom of the ocean. It's one of the most ambitious stories I've ever done, and there's no one I'd rather be creating it with than Sean Murphy. Sean's a great friend and we had a blast together on America Vampire: Survival of the Fittest; luckily, he's also one of the industry's brightest new stars, someone with unrivaled abilities as a world-builder—every scene he draws is so fully realized, so richly imagined, it's hugely inspiring working with him, and I'm grateful to him for signing on to be my partner at the end of the world, here."

The Wake By Scott Snyder And Sean Murphy Announced By Vertigo