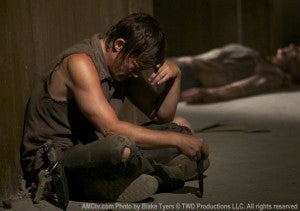 Fans planning to ring in the New Year with every episode of AMC's The Walking Dead will have to break out the Blu-rays to do so, after the network has apparently cancelled plans to re-run the first and second season tomorrow, opting instead only to replay the eight episodes of season three that have aired so far.

Following a 6 p.m. screening of the Luc Besson-directed sci-fi favorite The Fifth Element, The Walking Dead's season three marathon will begin at 9 p.m., continuing through the New Year and concluding around 5 a.m. on January 1.

It's unclear at this juncture what caused the change in programming; the marathon was announced after the airing of the midseason finale, according to Wet Paint, who noticed the change on the AMC website. A season three mini-marathon was aired that day, leading up to the first airing of "Made to Suffer."

It's possible the change was made to accommodate the black-and-white versions of the season one and two episodes that will be airing beginning in February; after all, maybe the network thinks that absence will make the heart grow fonder and ratings will be higher if those episodes hadn't just aired, even in color, a few short weeks before. There's also the possibility that the change has something to do with the recent ouster of showrunner Glen Mazzara, but that seems incredibly unlikely.

The Walking Dead will return on Sunday, February 10, with an episode titled "Suicide King," which will deal with the ramifications of "Made to Suffer," including the Governor's growing instability, the gladiator match set up between Merle and Daryl Dixon and the first meeting of Rick Grimes's group of survivors with the Woodbury community.