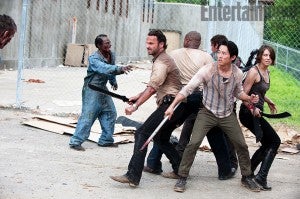 The first photos of the prison from AMC's The Walking Dead are live at Entertainment Weekly right now, and with it, the first real action shots of the season.

While Rick, Glenn, T-Dog, Daryl and Maggie work to clear the prison of zombies, actress Lauren Cohan (Maggie) gets to look as badass as she ever has and then some. Cohan, who was just recently promoted to a series regular on the AMC drama, hasn't really had much of a chance to do action scenes yet, but both she and the actress who plays her sister on the show have expressed an interest in getting down to some zombie killing, and it looks like that's in the cards for them now.

They've apparently taken a lesson from Michonne here, and are wielding bladed weapons to take out the undead inmates, rather than the noisy guns that attracted them so much trouble back in the show's second season. 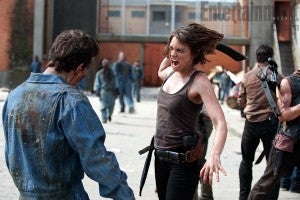 “I’m incredibly proud of the prison,” showrunner Glen Mazzara told Entertainment Weekly. “I think our crew has done a great job. It’s a huge sense of scale and magnitude I haven’t seen on any other show as far as construction. What’s important to us is the prison itself is now a character in the show. It’s a haunted house, it’s scary, it’s frightening, and there are parts of the prison that are always terrifying, that are always inaccessible to our group. It’s not necessarily the blessing that the prison in the comic book turned out to be.”

The Walking Dead's third season will begin in October on AMC, but look for a ton of scoops coming in the next two weeks as Comic-Con draws closer, including an interview here at ComicBook.com with series creator Robert Kirkman.