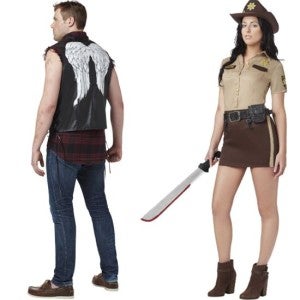 AMC and Spirit Halloween have announced a partnership to create exclusive 2013 Halloween costumes based on characters from The Walking Dead.  Costumes include favorite characters such as Rick Grimes, Daryl, Michonne and several of the iconic series' zombies. Spirit Halloween even developed a Sassy Rick Grimes costume for women who want to dress up as their favorite sheriff and still feel fashionable.

The line of products includes:

Bunny Slipper Girl – costume complete with robe, pajamas, wig and slippers in sizes for both girls and women (MSRP: $39.99-$49.99)

How WandaVision Gets Wanda's Story of Grief and Trauma Right