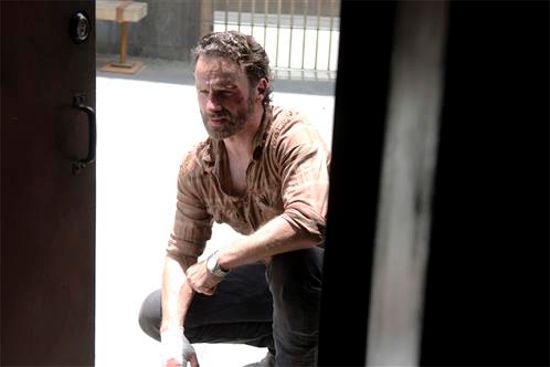 At the end of the “Isolation” episode of The Walking Dead, Rick asked Carol if she killed Karen and David, and she admitted that she did. Even though she basically committed a double murder, Carol’s motives were to keep the group safe.

What effect will Carol’s actions have on the group? Well, in an interview with EW, Andrew Lincoln warned that “something terrible happens that divides the group irrevocably.” We’re assuming Carol killing Karen and David is what he’s referring to.

Knowing that Carol was doing what she believed to be in the best interest of the group, how will Rick respond? Will he keep Carol’s actions to himself? Or will he tell the council?

In the past, the group has been put in a position of having to make tough decisions. During Season 2, the group discussed killing Randall to prevent him from revealing their location to others in his own group. During Season 3, Rick almost handed Michonne over to The Governor to protect the group, even though it would have been certain death for Michonne.

One could argue that what Carol did was no worse than what Rick was considering doing to Randall or Michonne. However, one could also argue that it was still murder. Carol had no way of knowing for sure the illness would kill Karen and David. With the deadliest flu strains throughout history, there have always been some people who survive.

If Tyreese finds out Carol killed Karen, he will never forgive her. He will demand justice. If the group fails to punish Carol, then Tyreese might very well dish out his own revenge. It will also be interesting to see how Daryl reacts when he finds out it was Carol, because he told Tyreese that they would put a bullet in whoever killed Karen and David. Will Daryl stick up for Carol?

Even the members of the group who wind up supporting Carol will likely have it in the back of their minds what Carol would have done if it was them who got sick first. Carol’s actions are likely to be so divisive that something will have to be done. Options could include imprisoning Carol, killing Carol, or banishing her from the group.

Of course, one possibility is that this marks the beginning of the end for Carol. Often in the past, when a character gets put in the spotlight on the show, it means that character might be headed for death.