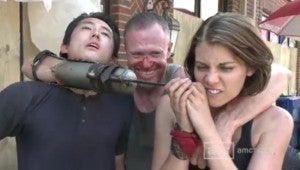 In spite of the notable handicap of being dead, The Walking Dead's fan-favorite Merle Dixon appears in the latest deleted scene from season three, which just found its way online ahead of the DVD and Blu-Ray release of the series.

You can check the scene out below, in which Merle gets a dressing down from Carol, his brother's kinda-sorta girlfriend.

The Walking Dead returns for its fourth season in October.