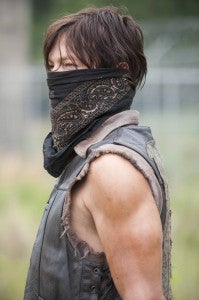 This is the second in our series of spoiler-free early review of AMC's The Walking Dead, Season Four. For our thoughts on the season premiere, follow this link.

Following on the heels of a promising, but not exactly overpowering, season premiere, the ante is upped in a big, bad way in the second episode of The Walking Dead's fourth season, titled "Infected."

It's easy, from the outside, to assume that the title refers to the zombie contagion. Leaving aside the fact that becoming symptomatic is the worst nightmare of every character on the show, we have the fact that Rick and his group know that everyone is infected--when you die, you turn.

We don't yet know if that's something that they've shared with the stragglers they've picked up from Woodbury and elsewhere in the makeshift community they've put together in the prison at the start of this season, but one thing is clear: they're going to find out. A non-bite-related death occurs this episode to a character who is isolated from walkers. No bite on that guy, but he turns nevertheless.

He isn't the only one, either; just the most obvious example. This episode injects the action that the premiere was largely missing, and does so in a way that projects the plot forward.

There's a B plot in this episode, too, and it's one that's far more intriguing than last week's various romances. There's an enemy within, to borrow a previous episode title, and it's not clear who it is or to what end they're acting--but if not for the generalized threat presented by the episode's major development in Cell Block D, that sub-story could very well overtake the show. 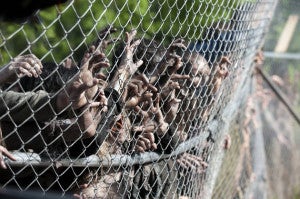 In fact, the stakes in the subplot become so high at one point in the episode that it's clear they may be building not to having an A plot and a B plot throughout the season, but having two massive events taking place at the same time, presenting so much danger and driving so much story that it will give the season a sense of frenzy that was missing from the premiere.

When I say these things were “missing,” of course, they weren't actually. They were simply waiting for a time to be presented that wasn't artificial. The premiere, which airs next Sunday, was a necessary stage-setting exercise and that they managed to give as much action as they do is surprising given how much plot they needed to achieve. The episode, really, wasn't as deliberate as bits of the first two seasons were. The issue was just that it toggled back and forth between the slow pacifism of Rick's story and the encased mayhem of the fairly isolated action beats. Here, Rick is confronted with the reality that there is no isolating oneself from the horrors of the world they live in—something he used to know, before they started to domesticate the land inside the prison's gates and move toward a more “normal” existence.

They find a groove in “Infected” that calls back to some of the better season three episodes; the stakes are high but without the artificiality that The Governor injected into so much of it. Any given episode for the second half of last season, it really came down to what the crazy guy with all the guns was going to do, and while that was unpredictable, it gave the series a sense of predictability because all you had to worry about, most of the time, was that one guy. He had his people in line and the walkers were a manageable threat. 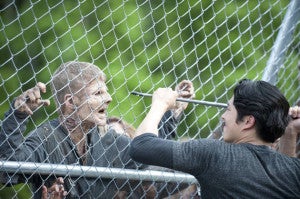 This time around, there's no Governor. Or there is, and we don't know where he's at. The walkers are a lot less manageable, and the new element they've introduced that gives walkers unexpected access to the survivors renews their threat as well as making the free and open culture they've created at the prison a little horrifying. There’s a sense here that the random violence is really random, not seemingly random but really serving a master plan, as it was with The Governor.

These early episodes are reinforcing that, too, since the extra characters introduced are doing a better job of interacting with the central cast and thus becoming likable than ever before. Last season, you may have felt empathy for dying Woodbury citizens, but generally when they went it was in service of showing us how bad-ass either our heroes or our villain were, so it was easy enough to accept. The fact that Andrea had become so unpopular meant that the only member of the primary cast anyone was relating to was the same one many fans had no interest in watching. So no one was safe, but it was hard to care. This year, that's not the case. It seems everyone has a name, a role, a friend—and when someone is in danger or worse yet dies, it carries weight.

Rick, too, is carrying a weight through this episode and while some fans will howl that he's being too emo and not decisive enough, I'm hoping that he doesn't go Dirty Harry too early; Lincoln's face is a wonderful study in conveying the emotional toll each hard decision, each wrong decision, each murderous decision has on Rick and, barring a major change to the status quo, right now he's pretty one-dimensional without that.