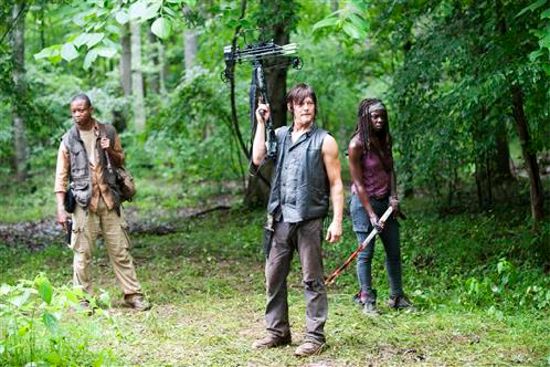 The “Isolation” episode of The Walking Dead opens with Glenn busy digging a grave. He glances over at Patrick’s glasses hanging on a post. The camera pans out to reveal several members of the group digging multiple graves.

Dr. S. is listening for a patient’s heartbeat, while Hershel is standing in the background. He evidently doesn’t hear one, because Hershel walks away and Dr. S pulls out a pocket knife to do what needs to be done to keep the patient from turning into a walker.

Tyreese is showing Rick, Daryl, and Carol the burned bodies of Karen and David. Tyreese is furious. He screams that someone killed them,  dragged them out and set them on fire. Tyreese screams at Rick, telling him that since he’s a cop, he needs to find out who did this and bring them to him.

Daryl comes over to try to calm down the situation. Tyreese grabs Daryl and pushes him against a well. Daryl tells Tyreese that they are on the same side. Rick tries to reassure Tyreese that he knows what he’s going through.

Hershel is cleaning Rick’s bloodied knuckles. Hershel asks Rick if he’s ok, saying that everything they’ve been working so hard to keep out has found its way in. Rick says it’s always been there. Hershel tells Rick about the next council meeting, but Rick says he thinks he’s done enough damage for one day.

Tyreese is digging a grave, when Bob Stookey comes over to talk to him. Stookey says Tyreese should let the doctor take a look at him, but Tyreese says not until the bodies are in the ground. 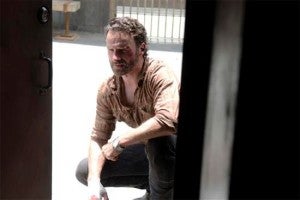 Glenn is telling Hershel that he thinks they are in the clear because they haven’t gotten sick, but Hershel says the incubation period could be different for everyone. Sasha comes stumbling out of the prison, and she’s coughing. She motions Hershel and Glenn away, and she says she’s going to see Dr. S. As she goes into the sick area, she passes by someone coughing up blood. Dr. S tells Sasha that they have to tell them it’s spreading.

Hershel tells Daryl, Carol, Michonne, and Glenn that it’s the symptoms of the disease that kills people, and they need antibiotics to fight it. Daryl says that every pharmacy nearby has been raided, but Hershel remembers a veterinary college that people might not have thought to raid. Daryl says he’ll make a run to the college, and Michonne says that she will go with him. Hershel offers to go with them, but Daryl says eventually they will have to run, so Hershel offers to draw a map instead. Hershel says they need to separate the most vulnerable (the young) from the rest of the group. Glenn asks what about the old.

Rick and Carol are getting water for the group, but Carol says the water line is clogged, and they will have to go out and clear it. Rick says they have enough water for now and will fix the clog tomorrow. Carol asks if Carl is pissed about going into quarantine, and Rick says he is. They look over at Tyreese finishing the graves, and Carol says Rick should go talk to him. 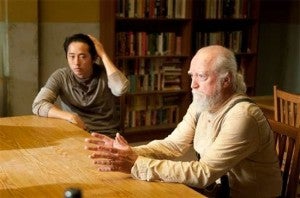 Tyreese looks up at Rick, and Rick says he’s sorry about what happened. Tyreese says it’s on both of us, but demands that Rick find out who did this. Rick tells Tyreese that because they were the only two who were sick that the person who did it might have been trying to stop the disease from spreading. Tyreese says they didn’t and now Sasha has it. Rick says he will find out who did it, but Tyreese says all he sees Rick doing is pumping water, which tells him murder is ok in this place now. As he leaves, Tyreese walks by three sick people, coughing up blood.

Carl is telling Rick that he doesn’t want to be locked in with a bunch of kids. If anybody gets sick, Rick tells Carl to let him know, but Carl asks what if they’ve already turned when he finds them. Rick tells him not to fire unless he absolutely needs to. Maggie walks in on Glenn, who is hunched over. Glenn tells Maggie not to come in that he has it.

Daryl is working on a car. He tells Michonne that he’s glad she’s there. When she asks where else she would be, he says running off. Michonne says he knows that she’s not running off. Daryl says they need another person besides her and Bob Stookey, but not Rick because Rick wants to stay with Carl and Lil’ asskicker.

Daryl goes and finds Tyreese, who is standing outside the door of the sick area. Tyreese says someone has to stand watch to keep anyone else from being killed. Daryl says unless they find the meds standing guard isn’t going to do any good, but Tryeese doesn’t appear to be interested in going with Daryl.

Hershel looks at a coffee cup with “Java Saves” written on it. Hershel starts to head out of the prison, but he runs into Carl walking around. Hershel says he has to go out to the woods, but Carl tells Hershel if he has to go then he has to come with him.

Lizzie (the little girl whose father died last episode) comes up and tells Carol that she doesn’t feel well. Carol tells Lizzie that she will have to go into quarantine. When Lizze asks Carol to tuck her in, Carol says her friend Glenn will tuck her in.

Maggie is thanking Beth for taking care of baby Judith. Maggie sobs that Glenn has it, and Beth tells her they don’t get to be upset that they all have jobs to do.

Hershel is gathering berries in the woods, while Carl watches for walkers. 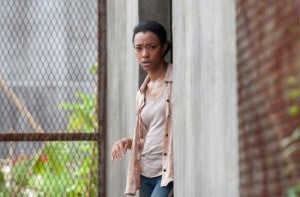 Hershel says he sees a new sense of responsibility in Carl. Carl spies a campsite in the woods, where there is a walker against a tree. As they are about to leave, another walker comes shambling up with metal trap on her leg. Carl is about to shoot, when Hershel says he doesn’t need to.

Back in the sick area, Sasha is telling Tyreese that it’s not as bad as it looks. Sasha is crying, but Tyreese says to say positive that Daryl is going out with a group to get medicine. Tyreese tells Sasha to get some rest that he has to go, and he leaves to join Daryl’s group after all.

Carol is getting a bucket of water, when Tyreese walks up behind her. Carol is startled, and Tyreese asks her to look in on Sasha for him. Carol tells Tyreese the she’s sorry for what happened to Karen. After Tyreese leaves, Carol is visible upset, and she stars kicking and knocking over water buckets. She eventually breaks down and starts crying.

Maggie is talking to Beth again. Beth says that she knows where Hershel went, because Dr. S. is sick, and they all have jobs to do. Beth says they don’t get to get upset.

Rick is looking at where the bodies were burned. He follows the trail of blood and looks at a bloody handprint on the door. He checks the size of the handprint, then looks down, visibly upset.

Rick spots Carol outside the fence working to unclog the water hoses, but walkers are starting to surround her. Rick rushes outside the fence to help Carol. Carol kills one walker, but her knife gets stuck in his head. Rick shoots a walker that is about to attack Carol, and they both make it back inside the fence.

Daryl, Michonne, Tyreese and Bob are driving for the medical supplies. Daryl turns on the radio when they hear a voice. Distracted by the voice, Daryl runs into a walker. There are numerous walkers in the road, and Daryl has to keep swerving to avoid them. Suddenly, the car is surrounded by walkers. Daryl slams the car in reverse, but he backs over a pile of walkers and gets stuck. He tells everyone to get out and make a run for the woods. As Daryl, Michonne, and Bob kill walkers, Tyreese just sits in the car. Tyreese finally gets out and starts smashing walkers with a hammer. Tyreese is in the middle of walkers and out of control. Daryl, Michonne, and Stookey have no choice but to leave him and head into the woods.

As Daryl, Michonne, and Stookey flee in the woods, two walkers come stumbling out behind them. Suddenly, Tyreese emerges behind one of the walkers and smashes its head with his hammer. Daryl kills the other walker, and Tyreese rejoins the group.

Hershel gives Dr. S some of his tea. Dr. S. spits up blood on Hershel’s face. Hershel takes his mask off and wipes the blood off. Next, Hershel is tending to Glenn, and Glenn says, “After everything I just get taken out by a glorified cold.”

Carol is coming back with buckets of water. Rick tells Carol that was a stupid thing she did.....going out there like that. Rick says Carol does a lot for them and the kids, and she sacrifices a lot. Rick asks Carol if there is anything she wouldn’t do for the people here. Carol says, “No”. As Carol walks away Rick asks, “Carol, did you kill Karen and David?’ Carol calmly looks at Rick and says, “Yes.” Then, Carol turns and walks away. The End.