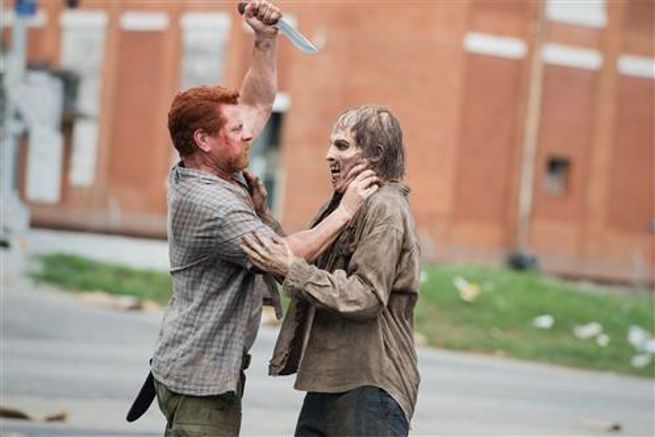 The “Self Help” episode of The Walking Dead starts with Abraham driving down the road in the church bus. Rosita is teasing Abraham about his hair getting long, and Abraham jokes that he’s thinking about becoming a plumber. Rosita says she’ll cut Abraham’s hair later that night.

Tara tell Eugene that his hair is getting a little long in the back and suggests he gets it cut. Then, she jokes, “Or is it your source of power?” Eugene responds, “I ain’t slaying a lion anytime soon.” Tara asks Eugene what’s up, and he says he’s thinking about what that preacher did.

Maggie tells Glenn that maybe Daryl and Carol came back and the rest of them are right behind them. Maggie turns around and asks Eugene how long it will take once he gets on the terminal and does what he needs to do. Eugene says it depends on the density of the infected around target sites worldwide. After Eugene rattles off some more scientific mumbo-jumbo, Glenn asks Eugune, “Why the hair?” Eugene says because he likes it, and he adds no one is taking scissor or clipper to it anytime soon. Eugene says that the smartest man he ever knew, his old boss T. Brooks Ellis, the director of the human genome project, loved his hair.

As the bus passes by a group of walkers, the engine suddenly blows out. The bus swerves and flips over on its side. Walkers start to approach the motionless bus.
In a flashback, someone is beating a man to death with a can. The camera pans out and it’s Abraham doing the beating. Abraham stands up and steps on the throat of the beaten man, killing him. The camera pans out again to reveal that they are in a grocery store, and there are several other bodies on the floor. Abraham turns around and calls out the name “Ellen.”

Back on the flipped over bus, Abraham is calling out for Eugene, as everyone on the bus is starting to regain their composure from the crash. Because the engine is on fire, Abraham, Glenn, Maggie, and Rosita bust out the back door of the bus to fight off the walkers. Tara stays on the bus to protect Eugene. When a walker tries to get in through a bus window, Tara stabs it and tells Eugene it’s time to be brave. Tara gives Eugene a knife, and they both leave the bus to help. At first, Eugene just stands around petrified. However, when he sees a walker coming up behind Tara, he rushed over to stab it to save her.

After all the walkers have been dispatched, Abraham barks out an order to check Eugene to see if he’s hurt. Eugene says he’s fine, but he notices blood on Abraham’s hand and asks if it his blood. Abraham says yes that his cut just reopened again. Before they can head into the bus to retrieve their supplies, the bus burst into flames.

Eugene suggests that they head back to the church, but Abraham insists that they have to continue on the mission. Abraham says retreat means they lose, that they don’t go back. Glenn says they are going with him that he’s calling this thing, but he just needs to know that Abraham is good. Abraham says he took a pretty good hit with the crash, but as long as they are rolling on, he’s good. Glenn says, “We’re rolling on.” Tara suggests that maybe they can find some bikes because bikes down burn. Eugene goes and looks at the walker he stabbed, then he spits on it. Abraham and the group continue their journey on foot.

In a flashback scene, Abraham is in the grocery store yelling out for Ellen. Abraham stumbles down the aisles until he finds a woman (Ellen) and two kids crouched down behind a counter.

Back in the present, Abraham and the group break into a book store. Once inside, they start setting up shop, by getting water from the toilet, building a barricade with bookshelves, and tearing out book pages to use in a fire. Rosita uses some string from a book spine to sew up the gash in Abraham’s hand.

After Rosita finishes patching him up, Abraham says that he’s going to take a sweep. Glenn finds Abraham watching walkers outside the window. Abraham thanks Glenn for coming with him. Glenn asks Abraham if he’s going to wrap up his hand, but Abraham says he’s going to let it get some air that he cut it pretty bad back at the church.

Abraham says it’s kind of reached the point where everyone alive is strong now. Abraham says he wants to say it’s never easy to kill someone, but it’s not the truth, that it’s the easiest thing in the world now. Glenn tells Abraham that he should turn in and get some rest, but Abraham says he really needs some ass first. After Abraham needs, Glenn says, “I didn’t need to know that, but cool.”

As Abraham and Rosita are having sex, Rosita looks up and says Eugene is watching them from the self help section. Abraham laughs and says don’t worry that he’s harmless.

Tara comes up behind Eugene, and Eugene admits to watching Abraham and Rosita. Eugene says he enjoys the female form, and he considers it to be a victimless crime which provides a distraction. Tara says that she was looking for Eugene to thank him for saving her life back at the bus. Eugene reveals that he sabotaged the bus to make it crash. Eugene says he put crushed glass in the fuel line back at the church and that the vehicle should have failed before it even got to the road. When Tara asks why he did that, Eugene says that he couldn’t survive on his own. Eugene says that if he couldn’t save the world that there is no way they would keep him around. Tara says they would because their friends. Tara says that Eugene needs to keep secret what he did and not to do it again.

Glenn is sleeping next to Maggie. Maggie is staring up into space. Glenn asks if she’s thinking about them, and Maggie says she feels guilty. Glenn jokes around about having a vacation on a bookstore floor. Maggie says it’s just good having this because it’s not about what was it’s about what’s going to be.

In another flashback, Abraham tells Ellen and the kids that they are safe now that he stopped them. Ellen is shaking and the kids are hiding behind her. Abraham looks down at his blood covered hands and tells them that it’s ok.

Rosita is wrapping up Abraham’s hand in bandages. Rosita says she thinks that they should stay here today, but Abraham says they need to keep moving. Abraham says every minute they waste in getting Eugene to Washington people are dying. Maggie says that this store was hardly touched that they could spend one more day searching for supplies. Rosita says they will sweep as they go.

Abraham says they have a vehicle, and he looks out the window at a fire truck. He adds that the vehicle has 500 gallons of water on it. At first the fire truck won’t crank, but Abraham eventually gets it started. However, after they pull out, the fire truck chokes down. As Abraham starts to work on the fire truck, a tire goes rolling by them. Then, a whole bunch of walkers come out of a building. They are overrun, but Eugene turns the fire hose on the walkers and takes them out. Abraham says he’s been to eight county fairs and one goat rodeo and he’s never seen anything like that.

Glenn says there’s a Goodwill where there might be some supplies. But Abraham is against waiting, he climbs on the roof of the fire truck to clean out the intake for the engine. Abraham starts laughing when he sees written on the ground, “Sick inside let them die.”

In a flashback, Abraham wakes up on the floor of the grocery store from earlier. He looks around and Ellen and the kids are gone. There is a note that says, “Don’t try to find us.”

Abraham and his group are now a ways down the road in the fire truck. Evidently, Abraham got the truck running, but it’s stopped again. Eugene is reading the H.G. Well’s book The Shape Of Things To Come on the back of the fire truck. Maggie tells Eugene that she knows why he has the haircut. Eugene says that it’s because he likes it, but Maggie goes into a story about how it lets everyone know he’s not like everyone else. Maggie says a lot of people in his position would have given up.

As Abraham goes at Eugne again, Rosita steps in front of him and puts her hand on her gun. Maggie roles Eugene over, but he’s out cold. Abraham walks away and falls to his knees on the roadway.

In a flashback, Abraham is looking at the bodies of Ellen and the kids. He’s about to commit suicide by bullet, when he hears someone screaming for help. It’s Eugene being chased by three walkers. Abraham kills the three walkers, then starts to walk away. Eugene calls out to him to stop, saying that he can’t leave. Abraham asks why, and Eugene says he has a very important mission.

The Walking Dead Recap With Spoilers: Self Help