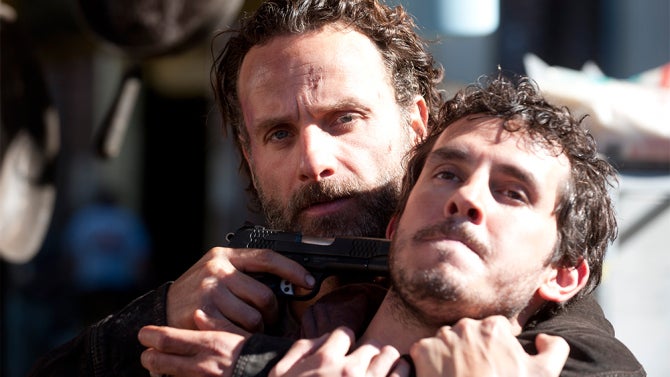 According to the ratings, everybody likes The Walking Dead -- but if you watch the show and talk about it, you'll notice something: lot of people seem to watch it just to complain. That's not what this is.

I will, however, be pointing out what I see as a major flaw in the logic of both the show and the comics upon which it's based. Bear with me. 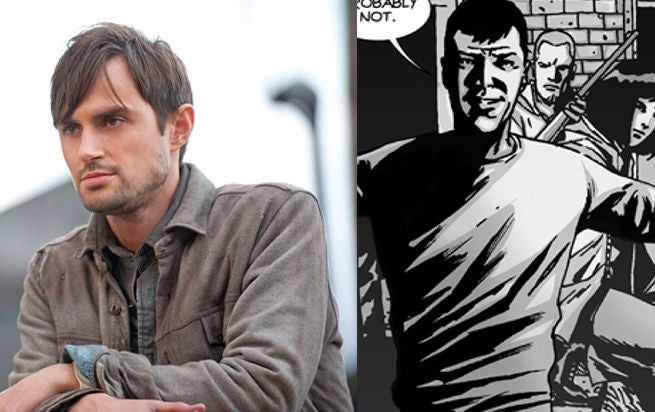 First of all, I fully expect Gareth and whatever residents of Terminus remain to return as The Hunters, fulfilling what has been self-evidently their destiny since the first time they appeared on camera. Whether we'll get a tease of that in tonight's episode or not, I don't know, but the show has a formula, and they're going to stick to it, and that formula demands that those characters will be back.

In the comics, The Hunters were a group of survivors that Rick's group encountered while on the road to Washington, D.C. following the fall of the prison.

The group, a roving band of cannibals, were headquartered out of an isolated, rural house in the comics. They would stalk, trap and kill other survivors for their meat, eating them slowly and putting tourniquets on their wounds so that their victims would last longer in a world without refrigeration. Keeping their victims alive as long as possible also had the added benefit of preventing them from reanimating before the meat was off the bone.

Earlier this week, executive producer Gale Anne Hurd finally admitted what everyone has known for months: that the residents of Terminus are inspired by The Hunters. And so, when Terminus fell and not everyone there was dead...well, it was pretty obvious where that story was going.

It actually would have been an interesting way to play with expectations and break the formula of the series a little bit, if last week when Terminus fell, that was the end of it. It would have been shocking -- and perhaps a baffling creative decision, but a ballsy one.

Anybody paying attention, though, knew that it wouldn't be. This is The Walking Dead, after all, and one philosophy rules above all others.

That is: revenge trumps everything in this show. In a series that's supposed to be about survival, every adversary the group has encountered is much, much more concerned with killing others than with survival. And most of the time, it just makes no damn sense. 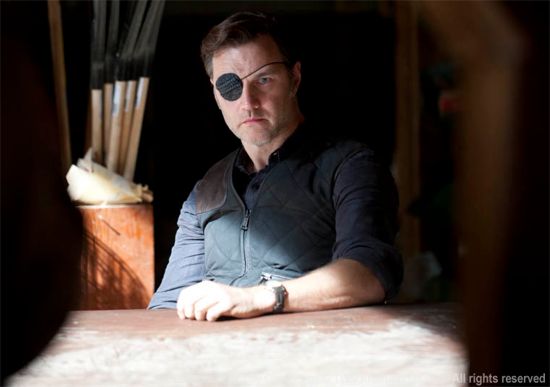 The Governor -- in both the comics and the TV series -- is a prime example of this: his character wasn't content to live comfortably and peacefully in Woodbury, and set out to take the prison for...reasons. It's easy enough to forgive his initial attacks on Rick and his people, since we see him doing the same to others. In the show, particularly, he has an inner circle who carries out violence against strangers so that the rest of Woodbury doesn't have to know how the sausage is made (not that a community that watches people fight zombies in a gladiatorial setting is all that stable to begin with).

After the first battle with The Governor -- again, in both the comics and the TV series -- he becomes even more unhinged, and one begins to wonder how he managed to assemble his second and more deadly offensive in the comics. Missing various limbs and left for dead, he somehow still manages to retain enough control of his community in this "kill or be killed" world to demand an attack on a fortified group of strangers who had turned back his first attack with ease. In the show, it's...somewhat...more believable, but it's still fairly difficult to comprehend that someone so obviously insane could keep it together for long enough to win over the cult-like support of a second community to lead to their deaths.

Above all of that, though -- why? Why would someone who was living in relative comfort and security feel like it was worthwhile to put his life and the lives of everyone he knows and cares about at risk in order to chase and kill others, in a world where everything around you is trying to kill you all the time? What's the point?

Again, there is an element of the suspension of disbelief here, and it can be argued that The Governor is a bit of a Hitler figure: deeply damaged but with a persuasive streak, and preaching to a congregation of terrified and traumatized people who want something to believe in. 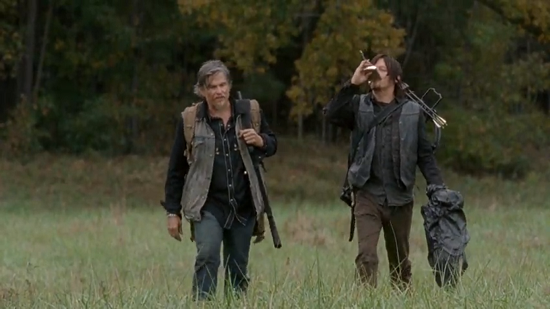 Okay, so let's talk about Joe and the Marauders.

This group were arguably the most believable threat in the show when they first appeared. They dressed like a motorcycle gang and operated like pirates: there was an undeniable sense of "cool" when you looked at them, but they were obviously Not The Good Guys.

At the time I remember thinking that they seemed like who Merle and Daryl Dixon might have turned into if not for Rick Grimes's timely intervention. They played with that a little, giving Joe characteristics that the Dixon brothers had referred to their father having had in the past.

And what they were doing made sense -- moving through an area that Rick, Carl and Michonne had discovered was fairly safe, with low human and walker foot traffic, and fairly well-kept and well-stocked, with some of the nicest living arrangements we've seen in the series so far. They were taking what they wanted -- and, yes, they implied that included sexual assault and the like -- and there were no authorities to stop them, and few walkers to be a serious threat to a well-organized group.

Where it all falls down is their obsession with Rick. They leave safety, comfort and resources behind and head back out into the dangerous world to find some guy who killed one of their people -- and fled, clearly wanting no more trouble and posing no more threat. This, from a group that routinely kills its own for violations of "the rules."

Yes, there's a gang mentality at play, since he killed one of their own and is not one of their own...but it takes a special kind of stupid, cruel and crazy to brave the world of The Walking Dead because you're upset with a guy. There was no indication they would ever find him! And if they did -- let's say they found Rick alone, without Carl and Michonne, and they killed him.

...Then what? They would have traveled for days to find some ramdom guy, kill him, take the candy bar he was carrying in his backpack, and...head back to from where they came? It was the dumbest plan in a show chock full of dumb plans, and the sheer bloody-minded stupidity of it could basically only be explained by the fact that these people were totally insane. Yes, they were a gang; yes, they operated by their own twisted, violent rules...but stalking Rick for days or weeks with no promise of ever finding him, just made no damn sense.

The world of The Walking Dead is one where logic shambled out the window right around the time Rick woke up in the hospital. That's one of the central tenets of the show, even if it's not widely advertised.

That's fine -- but in a world they want you to believe is grounded and gritty, at least some of the antagonists have to have believable motivations. If the only way to justify the actions of a group is to handwave it and say "It works because they're crazy," that's one thing. But for an entire group to be systemically bananas is pretty rare. For everyone Rick and his group to encounter to suffer from same? The odds are close to zero.

The Walking Dead: Revenge Trumps Logic, So Gareth Will Be Back