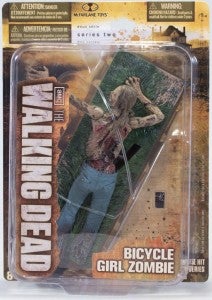 The Walking Dead creator Robert Kirkman recently sat down with Todd McFarlane to talk Walking Dead toys. McFarlane Toys has been creating a series of toys for both the comic books and the AMC television series.

An interesting bit of trivia revealed by McFarlane is that the Bicycle Girl Zombie was not wearing pants in the TV series, but they had to create pants for her for the action figure line. We’re assuming that maybe some of the McFarlane Toys retailers might have had a problem with a pantless figure.