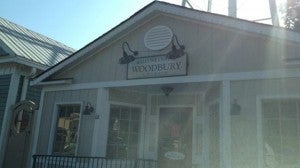 Early this morning, The Walking Dead creator Robert Kirkman (who executive-produces the AMC television adaptation of his comic book series) tweeted out the message that filming had wrapped on the series' midseason finale.

This means that the cast are about to go on hiatus and that the eight 2012 episodes of the series (which begins airing in the U.S. on October 14) are ready to go into post-production.

He followed that up by posting the image at right, as well, calling it a tease of the third season.

It also means, as you can see in the photo, that the midseason finale takes place in the Woodbury encampment, home to The Governor, the season's major antagonist. Fans of the comic books can probably guess where the finale will leave off, then--there's a particular issue of the comic that takes place in Woodbury that would create a great midseason cliffhanger after plenty of violence, strife, a few zombies and great scene-chewing opportunities for both The Governor's David Morrissey and Michonne's Danai Gurira.

If the story we've got in mind is in fact the midseason finale, it would set up perfectly for a huge showdown between The Governor and the survivors to round out the season finale in 2013.