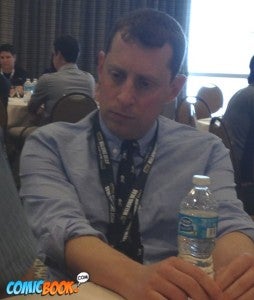 During our conversation with The Walking Dead creator Robert Kirkman, showrunner Scott Gimple and series star David Morrissey this weekend at San Diego Comic Con International, we asked Gimple what it was like to step into the role of showrunner on TV's biggest hit, taking over the reins from a popular producer with a public profile that made a comparably quiet guy like Gimple a little harder to get a read on.

He told us that, in fact, it wasn't all that daunting--because he'd been living with The Walking Dead for years, reading the comics and watching the show since before he was a producer.

Actually, he said, he would be doing our job if he didn't have his.

"I can't say I don't look at it ever, because it is interesting," Gimple said of the show's press and fan community online. "But as long as you don't get too deeply into it and also you don't go in there looking with an agenda. Like, 'I want to see people who liked it and I want to see all the things that people liked about it,' or 'I want to see people who hated it and sort of build that up in my mind.' I respect it--it's part of the enthusiasm for the show and it's wonderful but there is a line where you shouldn't let it influence you too much. I'm so psyched to do this. I'm so psyched that people--it's a part of their lives. This degree of difference has me here to doing that--to writing those recaps myself, so I respect it. i was psyched to be in Hall H today because I had an awesome seat, and that was cool."

The Walking Dead Showrunner: If I Wasn't Doing This I'd Be a Superfan