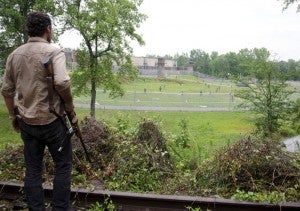 In an interview with The Hollywood Reporter, Glen Mazzara, AMC's executive producer for The Walking Dead, said that this season will be even darker than the comic book source material, with plenty of violence and a lot of layers to The Governor. He also hinted, when asked about Tyreese appearing on the series, that eventually they will introduce not only him, but other character from the show, particularly singling out newer characters Abraham and Negan.

"There are a lot of characters from the comics that we will eventually work into the show," Mazzara said. "Tyreese, Abraham, this new character Negan, who is the latest bad guy. They all exist in the world of The Walking Dead, and it's just a matter of time before we meet them all. Right now, we've got the Governor onstage, and we're just getting him up and running, but seasons from now, I could certainly see bringing in Negan. He's a really scary and compelling character, but we have no current plans now."

Negan seems a fit for the series once The Governor has been established (and, presumably, killed off). Television is a less deliberate medium than the comics and, as Mazzara admits, "It would be hard, after those last two episodes of season two, to go back to a quieter version of the show."

"When those walkers come through the farm at the end and everybody has to hit the road, all hell has broken loose," he added. "It is hard to put the genie back in the bottle. The pace is very different this year; it's a lot more suspenseful and intense than it was last year."