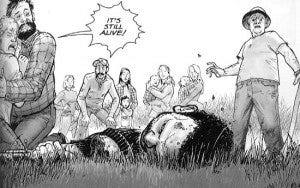 Incoming Deadpool artist Tony Moore, who recently filed suit against The Walking Dead creator Robert Kirkman, claiming that he had been unjustly deprived of his share in the multi-genre juggernaut, has now taken to federal court to be declared co-author of the property, as well as other collaborations he did with Kirkman, including Battle Pope. Moore was the artist on the first arc of The Walking Dead.

That's not all--he doesn't have particularly kind words for his onetime best friend, calling the writer "a proud liar and fraudster who freely admits he has no qualm misprepresenting material facts in order to consummate business transactions” in court documents.

The Walking Dead has long been the sole copyright of Robert Kirkman, who was credited as the creator and writer of the series as far back as the first issue (although not in the solicitations), but after Moore left the series he and Kirkman negotiated a deal under which Moore had a share of the rights. Ultimately Moore claims that he's been awarded most of the rights to comic book revenue, with almost all of the other-media revenue going to Kirkman based on what Moore describes as a deceptive bargaining tactic; even the share he's due under that agreement, Moore claims he has never received or been able to independently verify.

"In order for the State Court to properly award the correct money due and owing to Moore resulting from Moore's returned copyright interests, and because Defendants now dispute Moore's co-authorship status, Moore requires a judicial determination that he is co-author of the Works," reads the complaint, explaining why it would be necessary to file a second before the first has even made it to court.