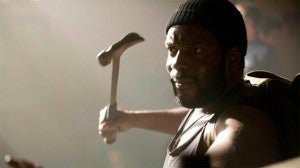 While The Walking Dead hasn't yet been (officially) renewed for a fourth season, we've got one of our first concrete clues as to how the rest of the season will play out; Tyreese, played by Chad Coleman, will reportedly appear in five of the final eight episodes this season.

While he admitted that he's in five of the episodes, he said that he couldn't reveal whether his character survives the year, saying only "Slowdown, be easy, you're going to be incredibly proud. All of these folks have the highest integrity [for storytelling] and character so you're going to see that played out on the show. Don't think there's any agenda, it's how storytelling unfolds sometimes. You're going to be so proud of Michonne and Tyreese and Sasha, what's coming you're going to be so shocked by. I've been lucky to have been involved in shows that are absolutely amazing. I say no worries, fasten your seatbelts."

By mentioning an "agenda" and singling out Michonne, Tyreese and Sasha, it seems likely Coleman is addressing concerns voiced by many fans that The Walking Dead seems to introduce and kill African-American characters on a whim, treating them as largely interchangeable. That may be reading a bit into it, though, as he again talks about the audience being proud of the work further on in the interview in a different context.

"That is the icing on the cake, to have something that was already present in another form and to have to honor it in a way that you know people have an attachment and to live up to that, that's huge for me," Coleman told MTV Geek. "That's my desire, to continue to make the audience proud of what's happening in the television world of Walking Dead."

The actor also discussed a potential romance with Michonne - a story that took place in the comics. Kind of.

"That's a dangerous [subject]. I can say that forces collide on the same level, that's what I will say. I have no, could not give you one iota about [Tyreese and Michonne]. That is a cliffhanger to the third power," teased the actor. "There is much that will surprise me as it will surprise you."

The Walking Dead: Tyreese To Appear In Five of the Last Eight Episodes This Season