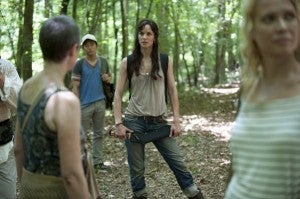 Sarah Wayne Callies, who plays Lori Grimes on AMC's TV adaptation of Rober Kirkman's Image/Skybound comic series The Walking Dead, has signed on to star in an untitled actioner about a tornado, Deadline reports exclusively.

Even though no one is ever really safe on The Walking Dead, the article assures viewers that Lori won't be leaving the show--at least not to accommodate the tornado movie. Rather, Callies will juggle the two while the movie--referred to as a "found-footage natural disaster film"--is in production.

One assumes that a "found-footage" film means that it will have a visual style in the vein of movies like The Chernobyl Diaries and The Fourth Kind. According to the original story, it will "[follow] a group of high school teens dealing with the aftermath of a devastating tornado."