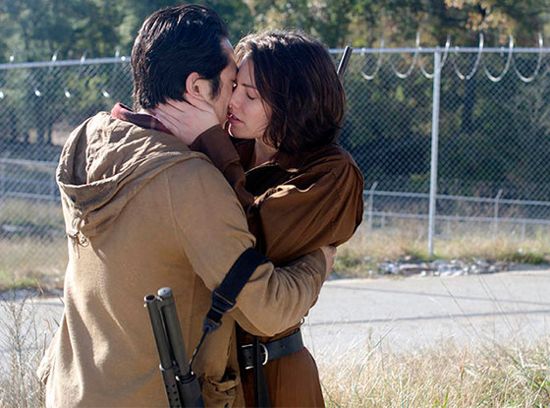 Last year, the second half of The Walking Dead's fourth season kicked off with "Inmates," the episode in which Glenn formed what then seemed an unlikely alliance with Tara in order to escape the wreckage of the prison following the Governor's second, fatal attack on Rick's group of survivors. When Tara questioned why Glenn would want her help considering that she was part of The Governor’s group, Glenn replied, “I have to find Maggie.”

When Tara asked who Maggie was, Glenn replied, “She’s my wife.” And, besides us speculating about it that night, it touched off a flurry of social media activity as our readers wondered just how that happened.

There hadn't been a wedding ceremony shown on the show, after all, in spite of the fact that the characters got married in the comics in an actual service.

At the end of Season Three, Glenn did propose to Maggie with an engagement ring that he cut off a walker’s finger. Maggie said “Yes” to Glenn’s proposal, but there was no mention of an official wedding date.

At the time we asked, "Did Glenn and Maggie’s wedding occur sometime during the gap between Season 3 and Season 4? Or is Glenn just saying wife because he considers Maggie his wife, even though there’s been no official wedding ceremony?"

Last week, ComicBook.com had the opportunity to speak with Steven Yeun, who plays Glenn on the TV series. The full interview will run later today, but one thing we made sure to ask was just when the marriage took place. Here's how the conversation went:

You refer to her as your wife in dialogue and believe it or not, that blew up our Twitter feed with people who said, "Hey, wait, we didn't see a wedding."

In the comics, the wedding (which you can read about in depth here) took place in the prison cafeteria in The Walking Dead #37, which is collected in The Walking Dead: The Calm Before, which is a time that was loosely adapted for television, and could have taken place at any time between just before The Governor's first attack on the prison at the end of Season Three and the Season Four midseason premiere.

While we only saw that location once that we can recall –- and Hershel might not have wanted to wander back there since its where he lost his leg –- it was a fairly secure location for the wedding, located in an uninfested part of the prison far from prying eyes of people like the Governor who might take such an occasion as an ideal time to spring. It was a family affair, with Billy Greene--Hershel's son, who doesn't appear on the TV series--also in attendance.

The Walking Dead returns Sunday at 9 p.m. ET/PT on AMC.