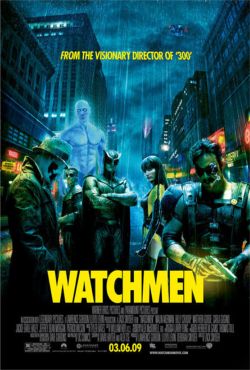 Many things have been and will be written about the Watchmen movie. Some people are calling it a flop, while others are praising it as a masterpiece. The one thing for certain is that no one will describe it the way that we jokingly just did in the headline for this article. While hardly the feel-good movie of the year, the Watchmen movie is a graphically violent, intense, often disturbing, but yet brilliant piece of cinema. Whereas The Dark Knight took people to the edge of what can be shown in a comic book movie and still be deemed socially acceptable by the mainstream public, the Watchmen movie jumps right over the edge. As scenes of superhero rape, mutilation, and mass murder play out, people who prefer their superheroes to be Tobey Maguirish are obviously going to be immediately turned off by the movie. When critics say the Watchmen is not a movie for everyone, they are absolutely correct. By its very design, the Watchmen is a movie that some people are going to hate and others are going to love. How could anyone expect a movie with dogs chewing on the bones of a child, a pregnant woman being shot in the head, and bizarre threesome sex between two people to not be met with a little negative press? To compare the Watchmen to The Dark Knight or Iron Man or any other movie is impossible. The Watchmen is not a pulse-pounding action movie like The Dark Knight. The Watchmen is not a good date movie that even your girlfriend who hates comic books will enjoy like Iron Man. The Watchmen is a different kind of movie. The Watchmen movie is a thought provoking, gut wrenching, beautifully filmed, well-acted journey into the soul of humankind. While The Dark Knight might have preached the lesson that most people will do the right thing if given the choice, the Watchmen’s message is closer to that people will do the right thing but only if you scare the crap out of them first. In all his gutsiness, Zack Snyder didn’t try to make a mass appeal movie. Snyder made the movie that he wanted to make, and he stayed true to his source. The Watchmen movie doesn’t try to follow the pattern of what people expect for a Hollywood movie to be, it sets its own boundaries. The Watchmen movie successfully does for movies what the original Watchmen did for comic books twenty-three years ago. It will make you think. All the thoughts won’t be pleasant thoughts, but such is life. While merely enjoyable movies come and go in people’s memories, it is movies that reach inside and stir up controversy that often stay with someone forever, such is the Watchmen.

The Watchmen Is The Feel-Good Movie Of The Year