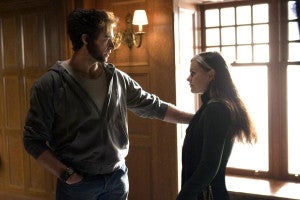 Back when The Wolverine was in early production, and director James Mangold wasn't saying much, fans only had speculation, old comics and a few randomly-selected photos of Hugh Jackman as Logan to work from--and the result was that many assumed it would be a "flashback" film set between the events of X-Men Origins: Wolverine and the first X-Men film, in which Logan encounters Rogue, Professor X and the rest of the team.

That speculation wouldn't have been there if one of the co-writers had beeen able to work out some details and convince everybody to do what he originally wanted for The Wolverine: to incorporate Rogue in a big way.

"I love Rogue and I just think that there’s something about this idea that Rogue is tremendously empathetic but incapable of safe human contact," Mark Bomback told Creative Screenwriting. "That always moved me and I thought that’s what really got to the heart of what makes the X-Men franchise so unique. So I was trying to do something with Rogue in the script. I even had a set of ideas that the old man possessed a version of Rogue’s power and that was going to be indicated by a white stripe in his hair. Eventually it became very goofy, and I threw it out because I started realizing throughout the script that it became more problematic than cool."

He added, "It’s no accident to me that in the first X-Men film the first two mutants that you really see who have a connection are Wolverine and Rogue. There’s something special between them, so I was trying to bring Rogue into it, but it just didn’t get there. I regretted there wasn’t a way to figure it out, but when I look at the film now, it would have stuck out if we tried to shoehorn her in there just because it was another character from the universe."

The Wolverine Could Have Been a Team-Up Movie With Rogue