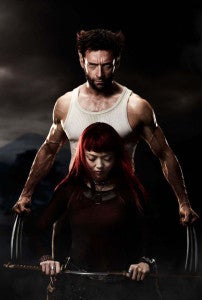 Not great news at the box office this week, according to Exhibitor Relations.

With fairly warm critical reception and a strong response from fans through a high CinemaScore, The Wolverine looked at one point not that long ago like it might flirt with as much as $75 million this weekend, but a slow descent that began on Friday night has resulted in a projected $55 million weekend for the film--about $30 million less than X-Men Origins: Wolverine brought in when it opened in 2009.

Fox will likely point to Batman Begins, which underperformed compared to previous installments but which was critically well-received and remains a fan favorite a decade later, making it a home video hit that continues to generate revenue for the studio.

The Wolverine is similarly more quiet and thoughtful than its predecessor, and more likely to attract a passionate audience who will buy the Blu-Ray--but that still doesn't change the fact that the movie made $10 million less than the studio projections...which are meant to be numbers the film can exceed and look good.

It may well have legs beyond its opening weekend--something that isn't true of Pacific Rim. That film brought in only $7.5 million this weekend, meaning that it looks as though clearing $100 million domestically will take at least another three weeks--forget about its reported $190 million budget. That said, the film is doing well overseas and, if you don't count its massive promotional campaign, it will clear that $190 million this weekend worldwide and be on the road to profitability.

Comic book adaptations RED 2 and R.I.P.D. aren't performing particularly well in their second weeks, either, with around a 50% drop-off from last week's already soft numbers.  R.I.P.D. is particularly frustrating for the intellectual property holders since Dark Horse has been involved with a few disappointing box office performances and no big successes of late. They may well join the chorus of voices begging for a Hellboy 3 soon. how the prospects for that movie are affected by a lower-than-expected performance for Hellboy director Guillermo del Toro's Pacific Rim is unclear.

Despicable Me 2, meanwhile, continues its roll. After we (and a number of box office analysts) all but counted out the rest of the summer movies in coming close to either Man of Steel or Iron Man 3, Despicable Me 2 passed the Superman reboot and became 2013's second $300 million movie domestically. It's still nowhere close to Iron Man 3, and hasn't even passed Man of Steel yet globally, but it's a great performance and likely makes the studio very glad that it's got a sequel already well into production.

The week's top five films were The Wolverine, which took in $55 million; The Conjuring at $22 million; Despicable Me 2, which generated $16 million and passed Man of Steel; Turbo, which made $13.3 million and Grown-Ups 2, which made $11.5 million to pass $100 million in its third week of release.