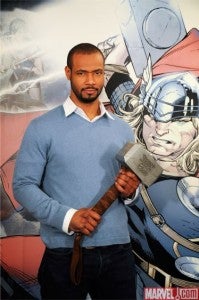 Isaiah Mustafa, who is most famously known as the Old Spice Guy, hosted the red carpet Thor Movie Premiere on Marvel.com. In addition to a red carpet, the premiere also featured such displays as a huge Thor throne and a S.H.I.E.L.D. car. During the early part of the event, there wasn't anyone for Mustafa to talk to, so he demonstrated his knowledge of the comic book universe. Mustafa listed his three favorite Marvel movies, which were Spiderman, Blade, and Iron Man. Mustafa also told viewers they should follow Stan Lee on Twitter, because his tweets were epic. For one of his first interviews, Mustafa talked to Thor screenwriters Ashley Miller and Zack Stentz. When asked about influences, Ashley Miller said, "The script was largely influenced by Walt Simonson." Miller also added, "It was kind of a love letter to Walt Simonson." When asked about other Marvel characters they would like to write movies for, Ashley Miller said Fantastic Four, while Zack Stentz said Dr. Strange. Stentz also added that they had pitched a Power Pack movie to Marvel, which is how they got the Thor job. When asked about her favorite comic book, Jamie Alexander, who plays Sif, said, "I like X-23 right now. I feel like I'm a little to old to play her, but maybe if I was very persuasive." Also, on the red carpet was Doug Jones, who played Silver Surfer in the Fantastic Four. When asked about reprising his role as the Silver Surfer, Jones said that he hoped so. Jones also added that there once was some talk of a spin-off from Fantastic Four and a standalone Silver Surfer movie. When asked about his favorite Marvel Comic movie, Thor director Kenneth Branagh said, "I loved the first X-Men." When asked if he was a prankster in real life, Tom Hiddleston, who plays Loki, said, "I've been known to pull the odd prank. At school, I did ridiculous things." When Mustafa asked Stan Lee about twitter, Stan Lee brought up the column he use to write called Stan's Soapbox. Stan Lee said, "Doing Twitter is just like those old soapboxes."