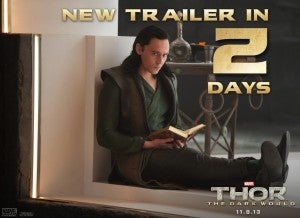 Loki, the trickster god and brother of Thor who served as the principal antagonist in both Thor and Marvel's The Avengers, gets a brief respite to read and relax in the latest official still photo released from Thor: The Dark World, due in theaters in November.

The image, tweeted out from the film's official site, announces that there's a new trailer coming on Wednesday for the Marvel sequel--Thor's first onscreen appearance since the record-shattering Avengers film.

Loki, in spite of not being planned to appear again in any of the currently-scheduled Marvel Cinematic Universe films after Thor 2, has become something of an icon for the studio, as they take advantage of Tom Hiddleston's popularity to offset the fact that Robert Downey, Jr. is taking some well-deserved time off from promotion before filming begins on Avengers: Age of Ultron in early 2014.

Hiddleston appeared at San Diego Comic Con International last month as the only Marvel actor to appear in full regalia. 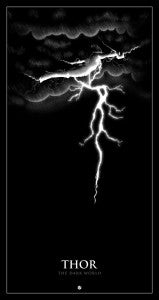 In addition to the shot of Hiddleston, the film got a new "Alternate Movie Poster" today. The print run will be only 150, and the poster (seen at right) will go on sale Friday at 10 a.m. GMT. The price for the hand-numbered and stamped poster is  £40.

There's quite a bit of speculation going around as to the nature of this film--especially since as Marvel plots farther and farther out, it seems unlikely we'll see a third Thor solo film before 2018 or so.

What we do know is that this movie will involve a bit more travel between Asgard and the rest of the Nine Realms, rather than being restricted simply to Earth. A number of rumors have a major character dying in the film, although who is supposed to shuffle off their (im)mortal coil changes depending on who you ask.

Thor: The Dark World is directed by Alan Taylor and will be in theaters on November 8.