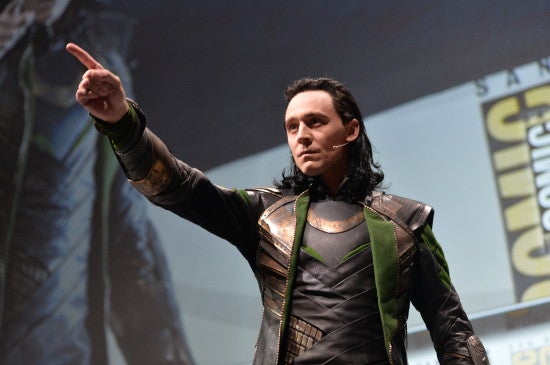 In a new interview, Thor: The Dark World star Tom Hiddleston said what so many of his fans don't want to hear: That there is "no movement" on the prospect of a Loki solo film in the near future.

"The idea of there being a Loki solo film is some kind of concoction and I can tell you there is no movement on it," Hiddleston told Collider in the video interview embedded below. "But I'd have to have a big brainstorm with Kevin Feige about it, if it ever came around. I do agree with you that Loki defines himself in opposition to Thor. There is not Thor without Loki, there is no Loki without Thor and that's part of his nature, that he defines himself in opposition to other people. But there also whole narratives in the comics which are huge fun where he goes on his own adventures. To be honest, I don't know. There are things I'd love to do with him. I'd love to see him out of context, on Earth, in the '70s, running a nightclub, playing with The Rolling Stones. Those are the hair-brained ideas that I have. Who knows? At the moment, I've made three films with Loki and I'm very proud of them and if it ends there, that's where it ends."

Given the popularity of the character--Thor: The Dark World was reportedly sent to reshoots to add more Loki--it's unlikely that will be where it ends, but one supposes that Hiddleston has to leave open the possibility, considering that Thor: The Dark World hasn't come out yet and all we know about his character going forward is that he won't be in Avengers: Age of Ultron. Given the fact that he "died" at the end of Thor, one assumes he has to play coy about the possibility of that happening again.

Tom Hiddleston on Loki Solo Film: "There Is No Loki Without Thor"