With DC Comics running a series of "holiday gift guides" on their blog The Source, it seemed as good a time as any to take stock of the ample crop of deluxe hardcovers hitting the market from various publishers this month, and talk about which of them would be the best gifts for the holiday season. This isn't a list that's in any particular order, as of course what makes a good gift varies widely from person to person, but it's a good starting point for that hardcore comics fan on your list. A caveat - we're going to pretend that you're buying for others here, and have little or no knowledge of what they've got in their collection. So for the purposes of this list we're including only standalone stories, or stories which are the first volume in a story. Things like the terrific Chew Omnivore Edition Vol. 2 are out only because they require a previous purchase to make sense of them. I'll also allow a little give on the opening end of December, going back as far as some mid-November releases in order to make for more variety, but since Christmas falls on the 25th, certain books--no matter how tempting they might be, and I'm looking at YOU, Madman 20th Anniversary Monster--are off the table because they just ship too late to be a Christmas gift.

Collecting all 52 #1 issues of this fall's massive line-wide overhaul at DC, this hardcover collection is sure to be on the wish list of just about every comics collector--it's also a great "big" gift for the comic book fan in your life, and it's 40% off at just about every online retailer, which allows you to give a big, expensive present for less. Of course, as was the purpose of the New 52, this hardcover also serves as a pretty good entry point for new readers who may be more comfortable buying in trade. Even at full retail, it's still cheaper than buying a bunch of the relaunch titles only to find they aren't your cup of tea--so why not grab it, sample and then throughout 2012, you'll know what books to say "yes" to as they come down the pike.

Doctor Who: The Dave Gibbons Collection

One of the great licensed properties in all media, Doctor Who has built a fanbase that rivals just about anything in entertainment for years. Dave Gibbons, meanwhile, is the legendary creator whose vision has helped to redefine dozens of mainstream superheroes as well as give visual life to Alan Moore's Watchmen, a seminal work for American comics. Put the two together along with the high-quality work of IDW's collected editions department and what have you got? A terrific holiday gift that can be for comics fans, Doctor Who fans or both. Bring your buddy from the comic shop who just can't get past the hokey special effects into the fold, or teach your friend with the Tardis fetish that comics aren't just for kids. 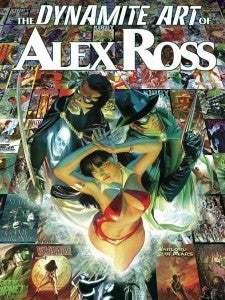 The Dynamite Art of Alex Ross Alex Ross made quite a splash for Dynamite Entertainment when he took his Project Superpowers there a few years back; I remember many fans wondering how long that relationship could last, given that Ross was so famous and the publisher, relatively speaking, so small. It seems to have worked out pretty well for all involved so  far, allowing Ross to flex his creative muscles as well as providing a library of covers not just for Project Superpowers but for seemingly every property Dynamite publishes. That mutually-beneficial relationship has resulted in a handsome coffee table art book, out this season and spotlighting Ross's work in a format that's rare in contemporary comics but a treat for the fans.

Fantastic Four by John Byrne Omnibus, Vol. 1 Few creators have made The Fantastic Four more of a must-read than John Byrne, whose take on the characters was a fresh and contemporary spin on characters who seem forever on the edge of getting stale, but without being so radical a reinvention as to feel forced or ridiculous. His run also set the stage for much of what has come since, reinventing the characters and the direction of the series in a way that few people ever get to do. The hardest thing to believe is that it took Marvel this long to start a series of these books; it seems like by creating a Fantastic Four omnibus compiling Byrne's work you're coming as close to printing money as archive editions of old work can possibly get.

League of Extraordinary Gentlemen Hardcover Ooh, Alan Moore won't be happy about this. But then, he's never really happy about much of anything that happens in comics--and a League of Extraordinary Gentlemen Omnibus is the perfect way for those of us who can't spring for the Absolute Editions, but would like a nice hardcover presentation, have been waiting for. Of course, this is a collection of the DC Comics material--so, the first two volumes, followed by the Black Dossier, without the recent Century story serialized as deluxe magazines over at Top Shelf Comix. The odds of ever seeing a true omnibus, though, are basically zero as Moore has sworn (again) never to do business with DC again following a series of public rows with the company, so this is probably the best you'll get. At least Top Shelf, who pride themselves in (and specialize in) collected editions, will likely give us a better treatment for the final work than DC ever would have.

Milk and Cheese: Dairy Products Gone Bad A collected edition that fans have been waiting for pretty much since the early '90s, Dark Horse has finally taken the initiative to get together a (near-) complete accounting of all of Evan Dorkin's classic Milk & Cheese strips. These strips, which ran in magazines as one-to-four page stories and have often been collected into comics (usually numbered as #1, for a variety of reasons), were a staple of high school humor for readers who grew up in the '90s--and Kieron Dwyer's terrific Lowest Comic Denominator, which remains uncollected, owes quite a lot to these dairy products gone bad. Violent and funny are really the only two words you can use to describe this side-splitting (in more ways than one) hardcover edition. Do you really need any others? 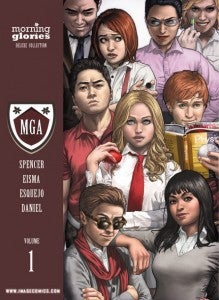 Morning Glories, Volume 1 Up-and-coming star Nick Spencer's creator-owned Morning Glories is a masterpiece of sexy suspense, taking elements from books like Grant Morrison's The Invisibles and J. Michael Straczynski's Rising Stars, shaking them vigorously and coming out with the Morning Glory Academy, someplace that you really, really don't want to go to school, but it's a fantastic place to visit every month. The hardcover has already shipped, but this week will see a second pressing, this one fixing problems with the original. The first print was shipped with some unlettered pages and while it may be a collector's item someday for the hardcore fan, it's not nearly as entertaining as reading Spencer's sparkling scripts uninterrupted. 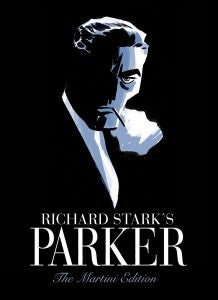 Richard Stark's Parker: Martini Edition IDW's Parker original graphic novels by Eisner Award-winning cartoonist Darwyn Cooke have been some of the best comics made in the US over the last few years. Now, with the third book on the horizon, the first pair have been collected in an oversized hardcover that, after some false starts, is finally shipping worldwide this month. It's rare that such a niche item gets a deluxe edition, and it shows the faith that IDW has in Cooke and the great success they've had with the Parker original graphic novels up to now. Here's hoping it becomes a popular holiday gift to encourage more such collections in the future. With recent news that the publisher and the artist have expanded their deal, this is as good a time as any to get caught up on the terrific adaptation of Richard Stark's classic hard-bitten criminal with a heart of...well, something. 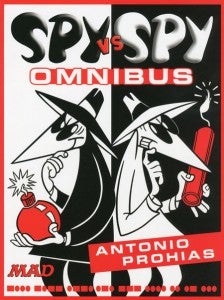 Spy Vs. Spy by Prohias Omnibus Given its enormously simple premise and style of art, it's both shocking and not at all surprising that Spy Vs. Spy, one of the most popular strips ever to come out of the pages of MAD Magazine, has lasted as long as it has. It's virtually impossible to believe that this one hardcover can contain all of the work that Prohias has done in the fifty or so years that these madcap characters have been making their rounds. Still, like Milk and Cheese these characters' appeal lies in their simplicity in many ways (imagine that instead of the Roadrunner and Wile E. Coyote, it's just two Roadrunners, and they're both very mean), so if there are a few bits missing here and there, most readers won't notice and it'll almost certainly still be worth having so much good stuff all in one place.

X-Statix Omnibus Another book that fans have been clamoring for almost since the series ended, it's not unusual to see comics binderies online featuring images of fan-made X-Statix omnibuses. Just about everyone who worked on these books is a Hall of Famer, and the stories ran the gamut from hilarious to harrowing to action-packed without ever losing sight of the fact that it was still a Marvel book. Writing in a unique and fascinating voice doesn't necessarily mean completely eschewing mainstream comics, and this book is one of the best examples of that. Plus, as mentioned above, the legendary Mike Allred, who provides much of the beautiful art here, has a fantastic hardcover coming from Image a few days after Christmas featuring his creator-owned character Madman. For those who are sitting there thinking, "I wish I could have me a little Allred for Christmas"--well, now they can.

My Hero Academia Levels Up an Unlikely League of Villains Lead