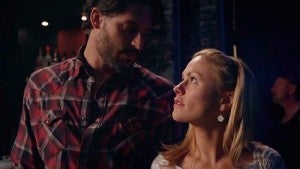 Fans and critics couldn't help but notice this year on True Blood that the relationship between Sookie and Alcide seemed to be going somewhere and then...just didn't.

The pair, who had a short-lived relationship in the Sookie Stackhouse novels by Charlaine Harris that are the source material for True Blood, not only seemed pointed that way at the beginning of the season, but interviews with the showrunners and cast seemed to suggest at one point that a hook-up for the pair was in the cards. But Alan Ball, the co-creator and outgoing showrunner on the series, told TV Line that there's no big mystery as to exactly what happened there.

“The decision to not do it this season [came about because] every single season, it’s been all about Sookie falling in love with this person or that person,” Ball said. “It seemed like she had enough on her plate this season to not just [say], ‘Okay, now Sookie’s gonna fall in love with Alcide!’”

Ball, who is leaving True Blood to develop new projects for HBO and will likely have a limited role as an adviser to the new showrunners, also said that just because it didn't happen right when the viewers expected, that doesn't mean there's no relationship in the cards for the pair down the road. “That doesn't mean that that door is closed. All of these supernatural guys in town carry a big torch for Sookie – even Eric, who doesn’t want to admit it.”

Eric Northman is the Vampire Sheriff in Sookie's area, who in the novels eventually becomes her long-term love interest and rises to a position of power among the Louisiana vampire community. Played by Alexander Skarsgård, he's also the owner of Fangtasia, a vampire bar and one of the major set pieces in later Sookie Stackhouse novels.

True Blood's Almost-Relationship: What Was That All About?