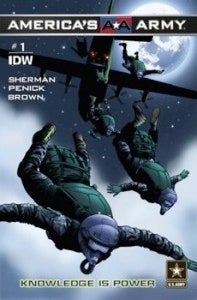 IDW Publishing and the U.S. Army announced today they have entered into a digital distribution agreement to feature the U.S. Army's America's Army Comics on  the IDW Comics app; Comics by comiXology for iOS, Android, Kindle Fire, Nook, Windows 8 and the Web; Apple iBooks; Amazon Kindle; Barnes & Noble Nook; and Kobo.   The America's Army Comics let readers delve into the storyline behind the highly successful America's Army PC game (www.americasarmy.com) that provides players an inside perspective and virtual role in the U.S. Army. For over eleven years America's Army (AA) players have been able to experience Army-influenced training and missions as they learned about the necessity of teamwork and leadership for success.  The AMERICA's Army Comics were created as a way to let players further explore the game's storyline and character plots of Soldiers' lives when deployed or at home.  Initially launched for America's Army 3, the new AMERICA's Army Comics are setting the stage for the upcoming America's Army: Proving Grounds game to be launched later this year. "IDW is proud to work with the America's Army team to bring this comic series to digital comics readers everywhere," said Jeff Webber, IDW's Vice President of Digital Publishing. "This is a great action story and a perfect complement to the game. Who would have suspected that the Army has strong comic creators too!" "This partnership with IDW is an exciting step for us as we are able to work together to bring America's Army and stories of U.S. Army Soldiers to a larger readership, said Marsha Berry, Project Manager for America's Army. Today's announcement kicks off with the release of four titles.  Over the coming months, the Army will release new issues that further the plot for the game's missions and maps. The America's Army comic series is produced by Michael Barnett and written by M. Zachary Sherman.   At the upcoming San Diego Comic-Con, M. Zachary Sherman and comic book artist Scott Brooks will be signing special edition art and comics at the IDW booth.