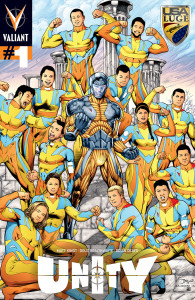 Valiant Entertainment today released a sneak peek at Unity #1 by Matt Kindt and Doug Braithwaite, including a look at a special variant cover featuring the U.S. Olympic Luge team.

A portion of the proceeds from each Unity #1 Team USA Luge Variant sold will be donated directly to the USA Luge team and contribute to their ongoing fundraising goals.

Valiant designed the look of the USA Luge uniforms, with luge athletes appearing in-competition at events across the world in racing suits patterned after X-O Manowar, the publisher's flagship hero and the central antagonist in their upcoming superhero book Unity.

The team members and suit design – originally envisioned by artists Patrick Zircher and Khari Evans – will make its comic book debut in an all-new Unity #1 cover image with artwork by rising star Diego Bernard. Featuring X-O Manowar surrounded by the real-life luge athletes he helped to inspire, the Unity #1 Team USA Luge Variant will be the first time Valiant has produced a specially commissioned variant cover for fundraising purposes.

"With X-O Manowar taking center stage next month in UNITY #1 and the beginning of the 2014 Games just months away, the timing couldn't be better to celebrate the unprecedented partnership between Valiant and USA Luge," said Russell A. Brown, Valiant's President of Licensing, Consumer Products, and Ad Sales. "It has been an enormous pleasure working the team and their incredibly gifted athletes, and now we hope to assist them even further with this one-of-a-kind, special edition cover for our biggest release of the year."

"Valiant has truly captured the passion and vitality of our athletes with this cover," said Gordy Sheer, Director of Marketing and Sponsorship for USA Luge. "Look for the team to bring every ounce of the energy presented here to Sochi when the Games begin this coming February."