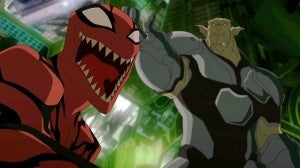 This week's episode of Ultimate Spider-Man hits tomorrow, with the debut of Carnage--who will have a new, different origin from the one comics fans are used to. Here's the episode summary:

"Carnage" - The Green Goblin returns with a new plan to turn Spider-Man into his perfect weapon, but one of Spider-Man's most popular foes, Carnage, is a dangerous surprise for both Norman and Spidey in a new episode of "Ultimate Spider-Man," SUNDAY, MARCH 31 (11:00-11:30AM ET/PT) on Marvel Universe on Disney XD. Dee Bradley Baker (Disney's "Phineas and Ferb") guest stars as Carnage.

Ultimate Heroes. Ultimate Villains. Ultimate Responsibility. Spider-Man must lead his team of teen heroes against the greatest assembly of super villains the world has ever seen! Season Two of the hit series ULTIMATE SPIDER-MAN continues as Spider-Man goes toe to toe with the Green Goblin's greatest mistake, the menace CARNAGE! Can Spidey and Norman contain the monster before it's too late? Don't miss the next amazing episode of ULTIMATE SPIDER-MAN debuts this Sunday at 11a/10c inside Marvel Universe on Disney XD.