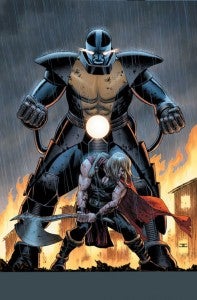 Cassaday's final issue on the title will be #4, with Olivier Coipel subbing in on the fifth issue before Acuña takes over full-time with #6, which sees Thor facing off against Apocalypse in the 11th Century as part of a story called Ragnarok Now.

"A lot of the foundational stuff is picking up from the [the Uncanny X-Force storyline] 'Dark Angel Saga'," said writer Rick Remender during Marvel's Next Big Thing press conference.

He added that "This has been a story that we've been reworking for so long now," and will deal with Archangel having impregnated Pestilence in 'The Dark Angel Saga. "This is something that has a magnitude and scope that I don't think anyone will anticipate."

Uncanny Avengers: Cassaday Out, Acuña In As New Regular Artist