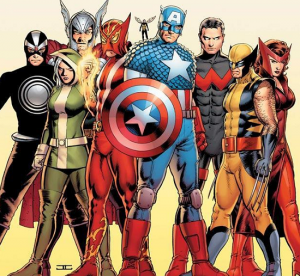 In one of Marvel's Next Big Thing liveblogs earlier today, Uncanny Avengers writer Rick Remender informed fans that the title's principal cast would expand to include Wonder Man, Wasp and Sunfire. The new cast members will be added in the series's fifth issue, which Marvel describes as an epilogue to the first arc.

Wonder Man, a powerful character who's often been directionless and whose history can be confusing, should be a particularly interesting addition to the cast, as his onetime lover, Scarlet Witch, is a key member of the team prior to his arrival.

"Wonder Man is going to play an interesting role as something of a pacifist and more than anything as a PR agent utilizing his time in Hollywood to help the team accomplish their goals," Remender said. "You've got somebody in Wonder Man who is top level powerful, but sees the fallout from aggression. You've got Superman who won't come help you."

The Wasp is also an interesting choice; her husband, Ant-Man, is currently appearing in FF and, in anticipation of his 2015 movie, taking on a larger role around the Marvel Universe in general. The character is also rumored to be appearing in Iron Man 3.

"Was is a classic Avenger who has led the team, and will be funding the team," Remender said of the character, who was recently revealed not to have died in Secret Invasion as previously thought. "She's a valuable asset and allows them to not take orders from the government. Beyond that, Wasp has a few interesting things she'll be doing to try to help the mutants' reputation. We get to find out what happens when Janet puts her focus on trying to make mutants cool."

Sunfire, of course, is the most curious choice of the three; while the other have long histories with the Avengers and a healthy share of their own fans to bring along, Sunfire is an odder fit, although a poll on the liveblog shows that he's the one fans are most excited to see.

"The interesting dilemma for Sunfire is he really believes in the mandate of the team and the specific mission Wolverine has for him," Remender told fans. "At the same time, he's a loner who doesn't like people. He sees the value of the team, but needs to learn to be around people."