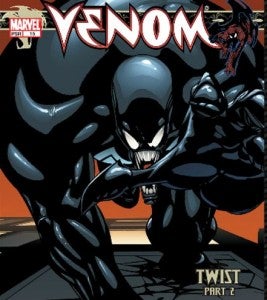 With The Amazing Spider-Man set to reboot the Spider-Man franchise this summer, Sony is wasting no time working to create a possible spin-off. You see, not only does Sony own the movie rights to Spider-Man, but they also own the rights to Spider-Man’s villains, and there happens to be one villain in particular who they think can carry his own film.

According to the LA Times, Sony is negotiating with Josh Trank to direct a Venom movie. Back when Chronicle was a surprise hit on Super Bowl weekend, we predicted that studios would be fighting over him for their upcoming comic book movie blockbusters. Initial speculation revolved around FOX securing Trank to do a Fantastic Four movie, but it looks like Sony might be beating FOX to the punch.

The LA Times cites the common “personal familiar with the project” and notes Sony wasn’t available to comment. If a Venom movie gets officially greenlit, then it won’t be the first time that Venom has appeared on the big screen. In Spider-Man 3, Topher Grace played the villain. Our guess (and hope) is that Sony would reboot the Venom character and that Topher wouldn’t be reprising his role in a Venom movie.

While initially, we wouldn’t be overwhelmingly excited about a Venom movie, we would be if Josh Trank was at the helm. He did an incredible job on a small budget with Chronicle, and we think he would be able to pull off a Venom movie in a way that would make comic book fans happy.

Venom Movie In The Works

Why Did WWE Have Another Hell in a Cell Match on WWE Raw?