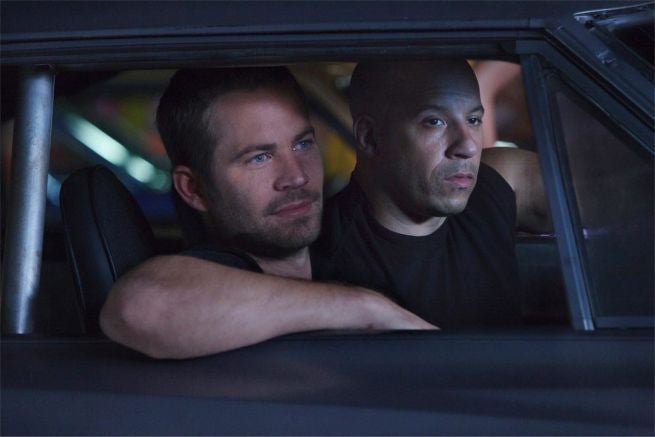 In November 2013, Vin Diesel lost a brother when Paul Walker was tragically killed in a car accident. This Friday, Walker's final film, a passion project for Diesel and the rest of the cast and crew, Furious 7 races into theaters.

Last night, the TCL Chinese Theater in Hollywood, played host to the world premiere of Furious 7. The cast, crew, families, and fans were in attendance. "You know I'm going to speak," Vin Diesel said as he took the microphone before the film played.

"I'm gonna tell you something, last year it was really hard to come back to work," Diesel admitted. "And then I looked up and saw James Wan willing to come back to work, with his brilliance. I saw my brother, Dwayne Johnson, showing up committed, ready to go back to work. I saw Jason Statham ready to fight me, which is a no-no," Diesel joked, "...to go back to work. I saw Kurt Russell, I saw Tyrese, I saw Luda... I saw Natalie. I saw Letty, played by Michelle Rodriguez... 15 years of playing Dom and Letty, and we come to this magical night."

"The studio was there but the studio was there in a different way than normal. The studio was saying we feel your soul and we'll do whatever we have to do to honor your brother, Pablo. There's so many people... There's so many people throughout this journey," Diesel said before rattling off a handful of people who have been there and helped him every step of the way. "When I told the world I thought this movie would win Best Picture, Oscars, two-sixteen... Instead of laughing, Michael Moses created a Variety ad that says 'Hell yeah' in it," Diesel said. Taking out an ad in Variety is a very high form of displaying respect in show business.

According to Diesel, and I agree with him, "This movie is more than a movie. You'll feel it when you see it. There's something emotional that happens to you, where you walk out of this movie and you appreciate everyone you love because you just never know when the last day is you're gonna see them." The ending to Furious 7 will surely make you appreciate those close to you.

As for Vin Diesel, he has family in our community and around the world. You can watch the tribute in the video below, courtesy of USA Today.