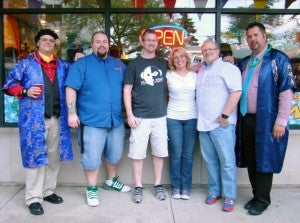 Alter Ego Comics, along with its new co-owners, Mark Waid and Christina Blanch, have announced that they have teamed with Aw Yeah Comics! for "the Image Comics of brick-and-mortar," a six-way partnership that sees the stores' respective co-owners investing substantially in one another's success.

Here's a bit from Mark Waid's blog post at Thrillbent, announcing the partnership:

When Jason, Christy and I opened our new Alter Ego location a few weeks ago, we asked Marc [Hammond, Aw Yeah co-owner] and Franco to come down for the day and give us their two cents about the way we’d set it up and the way it was run. (We asked Art, too, but one of us had to work that day.) Happily, the boys were really impressed. So much so, in fact, that they asked–quite seriously, money on the table–to invest in our store. Very flattering.

How about we make it a true partnership and invest in each others’ store?

I think Franco’s head exploded, but in a good way. Marc pointed out that, to our knowledge, no one had ever done anything quite like this before in the comics retail community.

Waid noted that the ownership situation doesn't change the identities of the respective stores, but that the merger allows them some new opportunities. He suggested that the new Alter Ego may feature a "kid-friendly boutique" spotlighting Aw Yeah's branding and products and mirroring the setup of the famed Illinois store.

"We can meld print and digital in double the locations and strengthen both the stores and Thrillbent," Waid said.

Waid, Alter Ego Team With Baltazar and Franco In "Image Comics of Brick-and-Mortar"