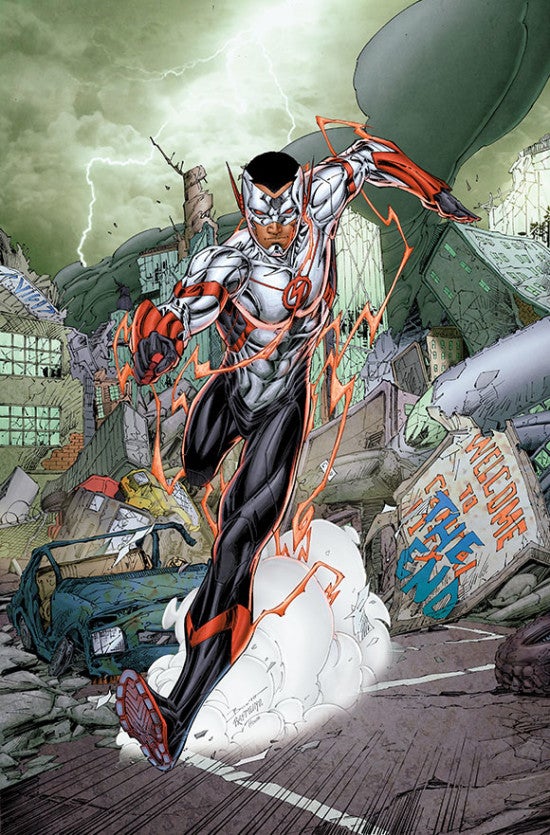 Wally West, who used to be The Flash (and, yes, used to be older and white) in the pre-Flashpoint continuity that was rebooted three years ago, will don a superhero costume for the first time in the New 52 during September's Futures End tie-in month issue of The Flash. You can see the cover, by Brett Booth and Norm Rapmund, above -- although that's actually just half the cover. It's the second "beat" of one of DC's two-part, 3-D lenticular covers coming in September, with the first part of the image being Barry Allen in his Flash garb. With a red-and-white (silver) motif, though, one must wonder: is this the new Impulse? 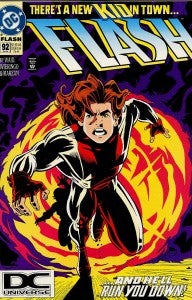 Previous to the reboot, Impulse was first introduced as a sidekick - slash - potential replacement for Wally West around the time of Zero Hour, when they were pretending that he might die during that crossover. Bart "Impulse" Allen, the grandson of Barry Allen from a far-flung future, traveled back through time to become a hero in the present, which also led to a lot of culture-shock humor and necessitated the involvement of Max Mercury, a Golden Age speedster, to help bring him (ahem) up to speed. After Bart hung up the Impulse identity and became Kid Flash, then The Flash, then a corpse, then Kid Flash again (comics!), the role fell to Wally's daughter Iris West. As you can see from the images at right and above, the jagged, white lightning that runs up the side of Bart's costume is somewhat reminiscent of the headpiece on the headpiece of the speedster above (who we're assuming is Wally). Ironically, the first DC Comics hero to use the name Impulse, who was not connected to The Flash, appeared in the classic Legion of Super-Heroes "Five Years Later" arc, where he played a major role. That Futures End, then, pushes the narrative forward five years in each of these issues makes any seemingly-coincidental similarities to Impulse perhaps a tiny bit more compelling.