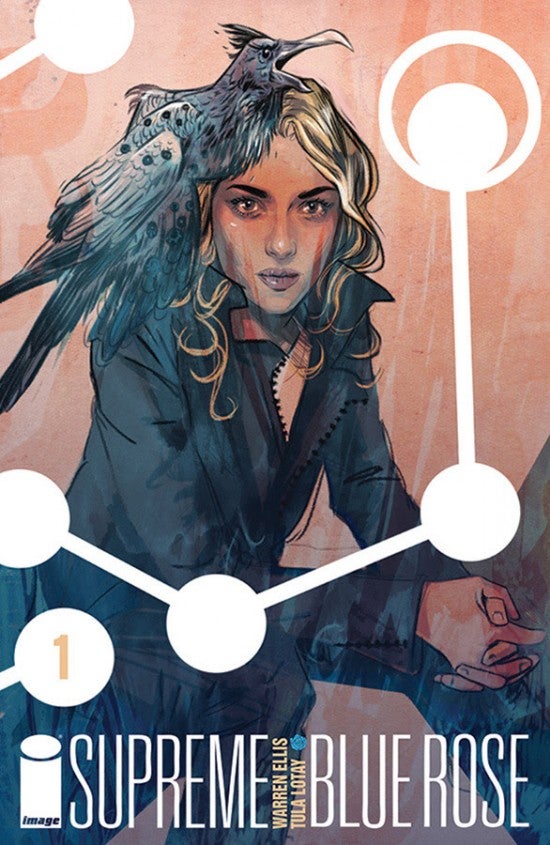 co-creator Warren Ellis teams up with artist Tula Lotay for Supreme: The Blue Rose, coming this July from Image Comics. The title, which marks the latest Extreme Comics relaunch in the Image line, will apparently feature at least some of the same characters as the superhero version we've seen in the recent past, but seems to be very differently handled. "One day I woke up with an idea, that came out of nowhere, for how to extend this most strange and storied of 'analogue' properties into a new space. A new floor on top of Alan Moore and Rob Liefeld's house," said Ellis. "And, since I had some time on my hands that year, I emailed Image, and we got my friend Tula Lotay involved—and her work will be a revelation to people." The cover for #1, seen above, looks to be a radically different vision of the book than our last iteration, in which Erik Larsen wrapped up Alan Moore's never-finished run and then continued from there. Around that time, other of Rob Liefeld's '90s-era Extreme properties (like Avengeline and Prophet) were being radically reinvented by award-winning creators like Joe Keatinge and Brandon Graham. Tied to the teaser released last week, the cover and teaser text comes with the following verse: You are not dreaming. We are trying to communicate with you. Local reality has been reinstalled. Things have gone wrong. The revision has corrupted. Finding Ethan Crane is your supreme priority. We are speaking to you from the ultimate bunker within the structure of multiversal time. Do not trust Darius Dax. We are all going to die. Supreme: Blue Rose #1 arrives in stores on July 23, and will be available for $2.99. It can be pre-ordered with Diamond Code MAY140571.