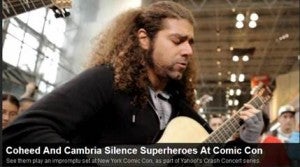 Over at Yahoo! Music, there's a new video (which you can also see below) featuring Coheeed and Cambria playing a "crash concert" at New York Comic Con. In fact, half of it is just a look at the convention floor, featuring a number of the same cosplayers that our own con coverage brought you along with an analysis of how one actually plays a concert at the packed Javits Center with no amplification.

Still, you get a few minutes of free music and a great look at what it was like trying to actually catch a glimpse of Coheed and Cambria, who had their own booth set up to promote lead singer Claudio Sanchez's book Amory Wars, at the show.

So, you know, not entirely unlike this unplugged set, where they had to struggle with what they called "guerilla-style" performance and, if the past is anything to judge by, at least four different folks from NYCC security hassling them along the way.