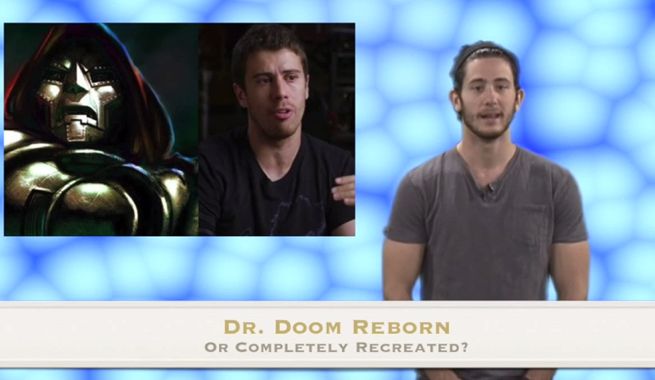 Former WWE Superstar CM Punk will be making his writing debut as he tackles a story in the upcoming Thor Annual #1 with his tag team partner, Eisner Award winning artist, Rob Guillory. I imagine Punk is pretty excited, as he has been a lifelong fan of comics and considers them one of three arts created in America, along with jazz and professional wrestling, maybe a little bias on that last one. Punk says he’s not afraid to fail, but he would rather try it and fail than not do it all.

This next topic is not for the faint of heart. In an interview with Collider, Toby Kebbell revealed that Victor’s name and origin will be recreated in the new film. “He’s Victor Domashev, not Victor Von Doom,” says Kebbell, who went on, “I’m a programmer, a very anti-social programmer. And on blogging sites I’m ‘Doom’.” If you scroll through the comments on our Facebook link to this article, you will see that this did not sit very well with comics fans.

Sam Raimi and Bruce Campbell will both be revisiting their cult favorite horror spectacle, Evil Dead, as Starz has announced a new series, titled Ash vs. Evil Dead. The Starz managing director, Carmi Zlotnik, says that Raimi will be writing and directing while Campbell returns to the Starz screen after the two worked together on Spartacus. Campbell is obviously excited, telling everyone he can’t wait to give them what they’ve been waiting for: “Serious deadite ass-kicking and plenty of outrageous humor.”

It’s the little Marvel movie that could and this week marked another milestone in it’s production as Michael Douglas has wrapped filming on Ant-Man according to his Facebook page. He posted this picture, which might indicate a grim ending for his character Hank Pym because if you look closely, you’ll notice a bullet wound between his shoulder and chest.

This week Legendary Pictures livetweeted their event at Blizzcon 2014, hosted by Chris Hardwick, where they revealed a ton of details about one of the most secretive projects in Hollywood. The film will feature the Alliance and The Horde and a handful of characters Warcraft fans will recognize. A lot of the casting was announced through Twitter. Leader of the Alliance, Anduin Lothar we be played by Travis Fimmel and leader of the Horde, Doraton, will be played by Fox’s NOT Victor Von Doom, Toby Kebbell. The cast also includes The Flash’s Clancy Brown and Agent Carter’s Dominic Cooper. The full character list and cast can be found on our main page.

So that was five and if you’re like me you’re still stuck on the fact the Victor Von Doom will no longer be Victor Von Doom. Which story from this week are you guys most excited about? Let us know in the comment section and make sure you follow us on Twitter, @comicbookdotcom to stay up to date. I am Brandon Davis, and I will see you next week!