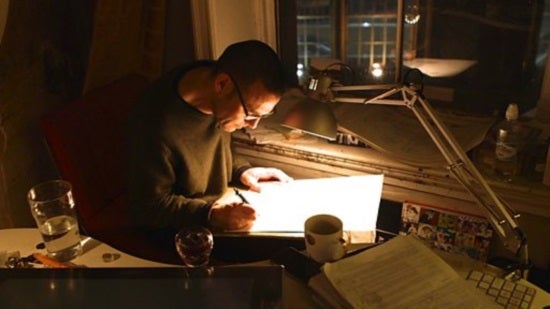 The BBC is currently airing a documentary series called What Do Artists Do All Day? Each episode is a 30-minute profile of an artist and their creative process. The ninth episode of the series focuses on Frank Quitely, one of the highest profile artists in modern comics. Quitely is best known for his work with Grant Morrison on All Star Superman, New X-Men, and Batman & Robin, and is currently working on Jupiter's Legacy with Mark Millar. The episode studies Quitely as he spends a whole day working on a single page from Jupiter's Legacy, from rough concept, to digital outline, to final pencils. It's a fascinating look into the creative process that will likely leave you with a much greater appreciation of his art (and comic book art in general) than you had to begin with. Over the course of the episode, Quitely also talks about trends in the comic book industry. "Superman sells better in times of economic depression and Batman sells better in good times," says Quitely. "When things are bad, people are looking for a God figure or a father figure. Whereas in the 80s for instance, when everyone was making money and people felt powerful and self-assured, then Batman seems to fit the zeitgeist better." The episode also looks at the long hours and comparatively little pay that comes with being a comic book artist. Quitely talks about how he almost lost his home while illustrating All Star Superman, one of his most critically and commercially successful works, and works until 4:30 AM trying to stay on deadline for Jupiter's Legacy. In the end though, there's something special about the visual narrative of comics that keep Quitely from leaving it for another industry. "I've become fascinated by the visual narrative," he says, "the way it works, the way it flows. In a comic, you're putting something down that doesn't really work in a film, doesn't really work in prose. The more I understand about how they work, the more I realize how unique they are." We've embedded the episode below, which is worth a watch for any comic book fan.

What Do Artists Do All Day? Shows A Day In The Life Of Frank Quitely