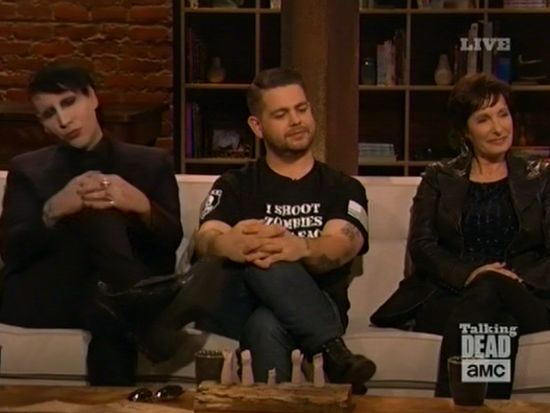 Marilyn Manson helped create the most bizarre episode of the Talking Dead ever. And that’s a big accomplishment considering the Talking Dead Season 3 finale with the weird apocalyptic call. We’ve transcribed some of the most unusual things that Manson said along with responses from Hardwick and other guests on the episode. (For anyone who wants to utilize our transcript, please remember to give a credit link to Comicboook.com as the source.) Be warned that spoilers follow.

Manson on who he thinks Carol looks like. Marilyn Manson: Activia! She looks like Jamie Lee Curtis. Chris Hardwick: I’m glad you led that with Activia.

Manson on zombie defecation and censorship. Marilyn Manson: According to your theory, which I’ve heard previously, that they don’t defecate. If they poop it would smell a lot like my bathroom.” Chris Hardwick: I get that question all the time with Twitter people. Do zombies poop? Number one I don’t write the show. Number two is his microphone down? Marilyn Manson: You put my mic out. You’re trying to censor me.

Manson on zombies eating probiotics. Gale Anne Hurd: You want the walkers to eat probiotics? Marilyn Manson: No, I’m just saying she looks like Jamie Lee Curtis. It’s like the salt and pepper hair. It made me think of Activia.

Manson on Daryl and Carol. Marilyn Manson: Didn’t you guys always think that she was going to sleep with Daryl? Chris Hardwick: Well, that’s still on the table, as far as I’m concerned.

Manson on Shane’s criminal ears. Marilyn Manson: It’s strange, because I love that it’s a zombie show. It’s essentially about morality, and you’ve got Grimes who for the most part tried to do what he thought was right. But in a zombie-type situation, where there’s no rules, morality, it goes right back to basics. It’s almost biblical, where you have to react. And Rick’s made the mistake of trying to save other people’s children, and it affected him losing his wife. Then, you have Shane, who I like to call criminally eary, because his ear looks criminal. There’s an old study about the shape of people’s ears makes them criminal or not. Chris Hardwick: We are deep diving today.

Manson on Rick’s symbolic hat. Marilyn Manson: Rick really lost his mind. No, not his morals, but he lost it when he had to shoot Shane. Not as much when the wife died. Not as much when she died, because he couldn’t deal with it, so he put it in his son’s hands. And the hat was very symbolic.

Manson again on Rick’s symbolic hat. Marilyn Manson: Him being the first character, and his hat being symbolic of him being a lawman. Like when you see a guy in a white coat you think, ‘Oh, he’s a doctor.’ You see somebody in a fireman’s outfit you think they’re a fireman. He and his hat, and then when he gives it to his son, the order shifted so people are starting to make their own decisions, but they need a leader.

Manson on Carol killing Karen and David. Marilyn Manson: I think she’s trying to be judge and jury, while Rick is trying to be civil. And he’s more let’s all decide, but he fell apart. And so you’ve got someone like her, and she’s burning those bodies. She’s suddenly like a feminist Sufragette City burning bras. I don’t think it was personal. Chris Hardwick: I don’t know if burning bras is the same as burning human beings alive.

Manson’s theories on why Carol killed Karen and David. Marilyn Manson: No, but I think the recklessness of it. She was just making decisions on her own emotions. She’s mad about all the things in her life. Maybe, she hasn’t gotten laid in awhile. She could be menstruating. Who knows what’s going on? Chris Hardwick: I’m not sure if I support those last two theories.

Manson on why everyone wants Rick to be leader. Marilyn Manson: Because he’s handsome. And when he puts that hat back on I guarantee stuff’s going to change. That hat’s the key. It’s symbolic.

Manson on if it’s important to care about people during a zombie apocalypse. Marilyn Manson: I think it’s almost like in real life, which I like to use, I always use zombie as a metaphor. If you’re stuck in a situation, you get a pencil, a piece of paper. You can either write a suicide note. You can stab someone. You can wipe your butt with it. You can do whatever you want. You’ve got limited options, so you have to react and live with the situation. But when it comes to survival and loves ones, this is the choice that maybe Rick has made mistakes on. Say you get mad in a different situation. You’re mad because someone fornicated to your girlfriend. So you want to kill this person. But that could put you in jail. Then, you could be put in jail, so you really wouldn’t be doing anyone any good. And I’m not talking about the jail that they’re in, but I just mean in general. Chris Hardwick: Someone online is writing an algorithm to follow this train of thought.

Manson on The Butterfly Effect. Marilyn Manson: There’s morality, but then there’s choices of pragmatism and deciding whether this is a moral choice. That guy needs to die for doing something bad. But if I kill him, how much is it going to mess up everything else afterwards? The Butterfly Effect. Not with Ashton Kutcher, but just in general. Chris Hardwick: I’m glad you made a point to point out the difference between the two, because I thought you were bringing the Kutch into it.

Manson on Tyreese just sitting in the car when the zombies were attacking. Marilyn Manson: I thought it was a reverse of Training Day with Denzel Washington and Ethan Hawke. And he had to school him in the car with the PCP and what not. And he just sort of came through at the end. Ty was actually Ethan Hawke. They just flipped the script. Chris Hardwick: I think everyone’s thinking that. Gale, is that why? Gale Anne Hurd: You know what, absolutely. We watched Training Day right before we wrote the episode.

Manson on the quality of Walking Dead and the car Daryl drove. Marilyn Manson: But Walking Dead I think has really defined cinema as an episodic TV show. It’s better than movies now. When you watch movies, you’re really disappointed after seeing Walking Dead, because it’s so well done. And the acting and the special effects, I just think they should use four-wheel drive. Chris Hardwick: No, but it made sense that they used Zach’s car, because they needed a fast car.

Manson on having no friends. Marilyn Manson: The zombie herd gave me the fidgets. It was almost like the first season when you see a lot of them and then you think I should not have meddled with that first one. It’s kind of like when you’re at a club and you start a fight with some guy. And you think that you’re tough, you take your jacket off, and I’ve been to jail type of thing. And you haven’t been to jail. And then his friends show up. And you have no friends. Chris Hardwick: That story makes me sad, but at least I could follow it. Marilyn Manson: You told me that story right before the show. Chris Hardwick: I didn’t tell you that story. Which story? Marilyn Manson: That you got in a fight, and you had no friends. Chris Hardwick: Oh yeah, I had no friends. I did tell you that story. Yeah, come back and join us Manson.

Manson on the difference between Rick and The Governor. Marilyn Manson: The difference between Rick and The Governor is The Governor did have his small community locked down in more of like a Hitler-type situation, where they all were afraid of him, and he ruled by fear. Chris Hardwick: You had me until Hitler. Marilyn Manson: What I’m saying is that he had everyone run by fear. Rick tried to run it more as a democracy. Chris Hardwick: I’m understanding what you’re saying. I’m so excited. Marilyn Mason: So I think that The Governor is going to lead the zombies because he’s so bad. And he’s going to lead them on a personal vendetta. Chris Hardwick: I tell you what. If you’re right, I’m going to be so mad, because I’m not understanding anything else that you’ve said tonight, and this is actually a very good, lucid point.

Manson on Gale Anne Hurd’s point that elderberries reduce the amount of time that people are sick with flu. Marilyn Manson: Can you take that for Jack’s genital warts? (Referring to fellow guest Jack Osbourne). Chris Hardwick: We have a caller. What’s you name and where are you calling from? Marilyn Manson: He doesn’t have those. I’m just kidding.

Manson on how the zombie apocalypse is like the Columbus discovering America. Marilyn Manson: The Governor had strict rules, whether they were good or not. You know, it’s our opinion, morally or just questionably. Just Rick didn’t have any hardcore rules, until now he’s started with those three questions. So Rick is kind of realizing politics need to be involved. It’s almost starting a new world. It’s like when people came to America and killed all the Indians. It’s the zombies. Chris Hardwick: No, it’s not like that at all.

Manson on The Walking Dead comic books. Marilyn Manson: I didn’t want to spoiler alert myself, so I didn’t read them. I bought them all.

Manson on who is feeding the rats to the zombies. Marilyn Manson: I think it’s Carol’s daughter. Chris Hardwick: No, no, Sophia? I don’t think so. I think they wrapped that one up.

Manson on Rick’s group finding a new home instead of the prison. Marilyn Manson: Isn’t there like any abandoned strip bars? Chris Hardwick: There’s a ton of cool stuff that you can buy at Shopthewalkingdead.com.

Manson on his vision for future episodes of the Talking Dead. Marilyn Manson: How about if we all hosted the show also with you? Chris Hardwick: I think everyone would love that. I think you should come back.

What Marilyn Manson Said On Talking Dead About Walking Dead